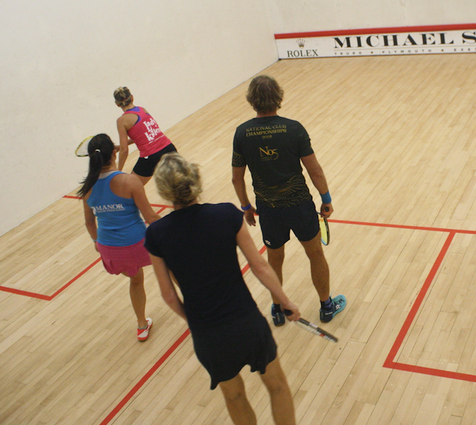 After a period of dominance from Luke Bishop, who won the South West Racketball Open from 2017-2019, Mike Harris ensured the title stayed in Devon and Exeter by beating Michael Robinson 2/0 in the final. Elsewhere, Natalie Lawrence won a 6th Women's South West title, with Roger Camp and Neville Buckle winning the Over 40's and Over 50's categories respectively.

Devon and Exeter is a fantastic local squash and Racketball centre with a great atmosphere. The club was one of the first centres in the UK to really champion Racketball and has shown just what the sport can do for the revival of a playing community. This is one of the only clubs that have converted a gym back into a squash court due to overwhelming demand.

For More Information: Email admin@uk-racketball.com or call if your enquiry is urgent call Mike on 07789 394617

If you are unsure which category to enter please contact admin@uk-racketball.com or if your enquiry is urgent call Mike on 07789 394617

History of the devon and exeter open 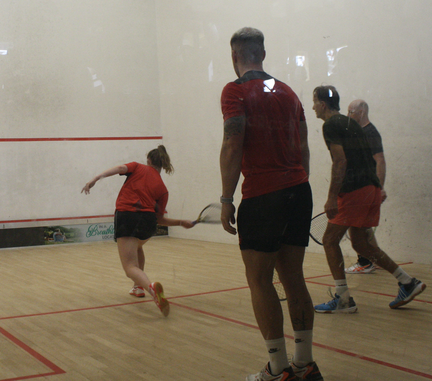 ​The Devon and Exeter Club is an old school squash club with a fantastic Racketball tradition. As you walk in you are struck by the sense of community, love of sport and with the bar sitting as the focal point it is a club that breads lifelong friendships. This is now the 9th UK-Racketball event that Devon and Exeter Club has hosted and it was another great day for our tour, the club and Racketball.

The grade of the day turned out to be the doubles with some brilliant Racketball right the way through. This was not a surprise with Racketball doubles being a stable diet of the D&E faithful and some pairings in the series becoming stronger and stronger. Alexis Smith and Nick Jenkins came through as victors in Group A but were pushed hard, 11/9, 11/9 by local pairing Graham Holmes and Natalie Lawrence and then all the way to a decider by Lee-on-the-Solent pairing Jodey Watts and Callum Arnott with a tiebreak in the 3rd all that separated them.
​In Group B Amber Marshall and Damien Burgess made it through the group without dropping a game to set up a great final. The rallies in the doubles final were the longest we have seen. When players are working together and the movement is good it becomes difficult to find a winner and this was the case throughout this match despite three fantastic racket skills players and Nick Jenkins (sorry Nick). The first went the way of Smith and Jenkins only for Marshall and Burgess to fight back in the second. The decider could have gone either way but in the end the 11/9 to Smith and Jenkins was down to the steadying of the ship from Jenkins, that determined play and great communication between the pairing. We are still in the early days of Racketball doubles as a competitive sport and players are still experimenting with strategy and tactics. The combination of attack and defence and clarity of roles was great to see from Smith and Jenkins and one to watch for in the future. 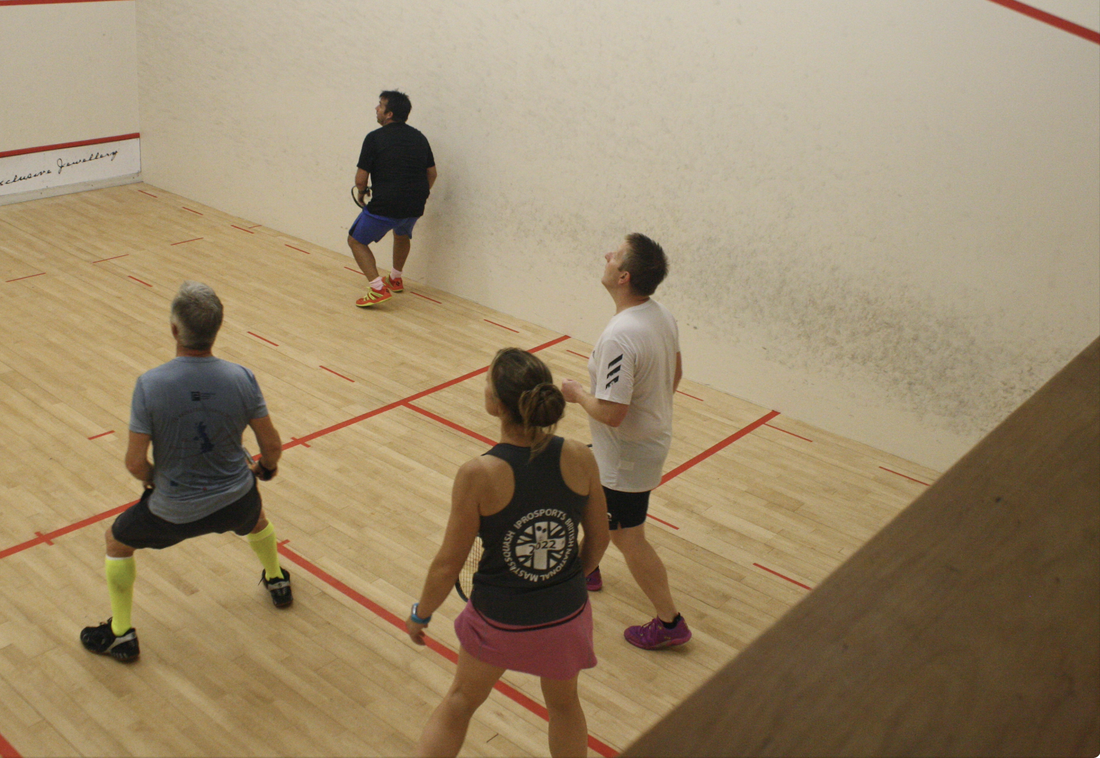 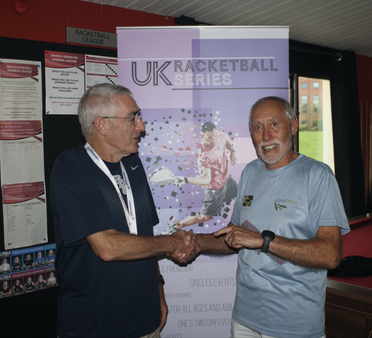 ​It was a big draw for the B Grade split across 4 groups. The winner of Group A and C met in the first of the semi finals with Redland Green’s Phil Borrett overcoming a hard challenge from Nick Jenkins. Middlesex’s Olly Staunton saw off in form Jo Hutchings in the second of the two semi-finals to set up a great final. Staunton took the first game in the final 11/7 only for Borrett to fight back in the 2nd. It was a game that could have gone either way with both players having their chances to finish, it proved to be a double game, consisting of 34 points and eventually going Borrett’s way 18/16. It was always going to be tough to rally after such a long game but Staunton did and fought Borrett all the way to the finish, the event eventually went the Redland Green’s players way 11/9 in the decider, what a final!

Graham Greensall continued his good run of Over 70’s form with straight games victories over Andrew Rugg-Gunn, Terry Norman and John Bullard. It was a solid performance from Greensall throughout and one that will set up a big challenge for the British Open in October. 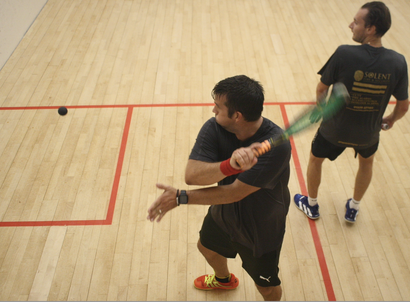 With many of the best players in the country present for the Over 50’s this was always going to be a great tournament and did not disappoint. Previous event winners and finalists such as Nev Buckle and Chris Burton failed to make it through the group stages it was so strong. The two matches that decided the day were firstly Phillip Hall against Roger Camp. The Nuffield Health player Hall deployed his usual mix of skilful play and tenacity to push Camp all the way but just didn’t quite have enough to get over the line, losing the decider 11/8. This set up a Roger Camp, Jason Russell final. Two of the best players in the country in this category and it was an incredible first game, Camp through everything at Russell but sometimes you just can’t break him down, 11/9 to Russell and once this game went his way he pushed on and took the 2nd in the face of ever weakening Camp resistance. A great rivalry in the making between these two.

​Local hero and UK-Racketball Series legend Luke Bishop suffered an early set back in his first game of the day with a defeat to inform Callum Arnott 11/8 in the decider. With the way that the groups worked this meant that he faced B Group winner Mike Gregory in the semi finals. Gregory had controlled well in the group stages with victory over Women’s National Champion Amber Marshall and Damian “The Shaft” Burgess. 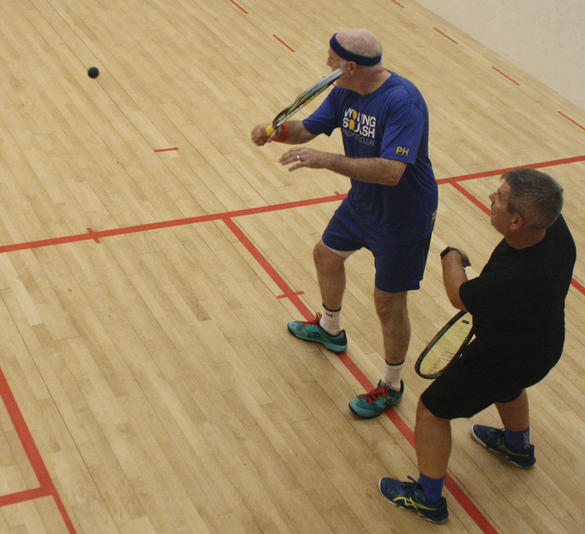 ​Bishop against Gregory was a great match up and an advert for anyone in any doubt about the potential for creative attacking play on a Racketball court. Gregory had game balls in both 1st and 2nd but despite incredibly accurate Racketball and a huge amount of retrieving by Bishop the series legend was not going to be denied a place in the final and a chance to reply his earlier defeat to Arnott in the group stage. It was another game that could have gone either way and by the end both players were completely shattered, 12/10 in the 3rd decided it in Bishop’s favour and gave him another title to add to the growing collection. 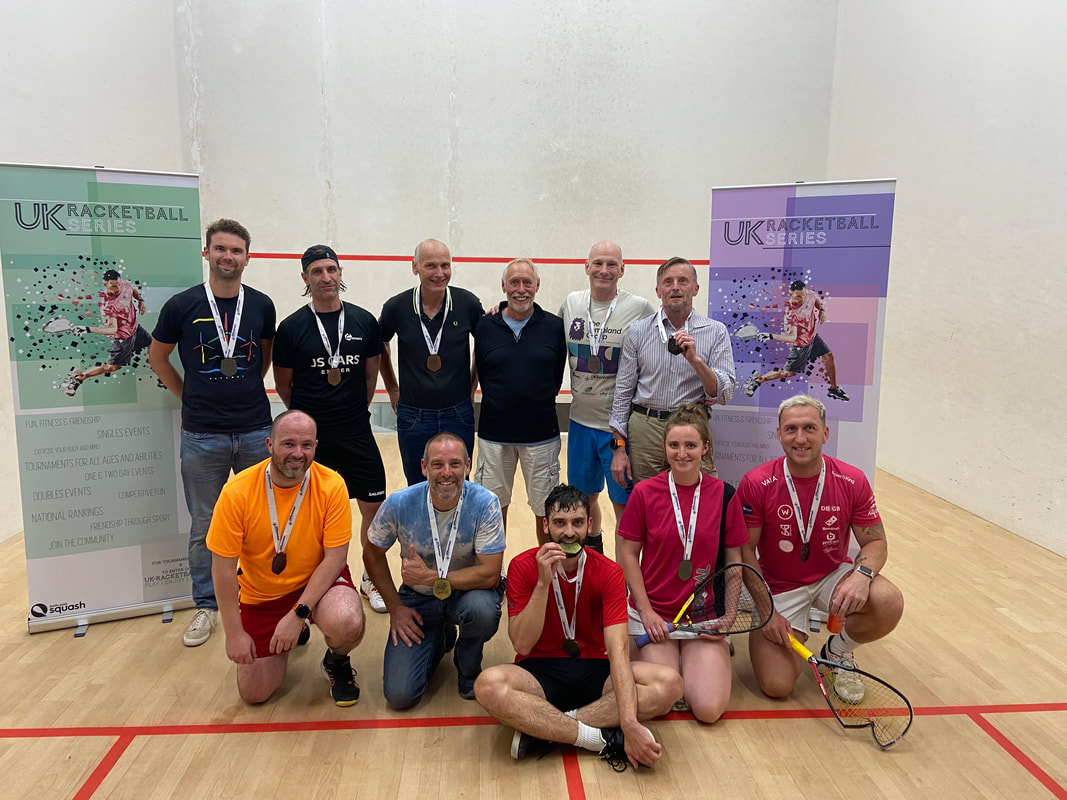