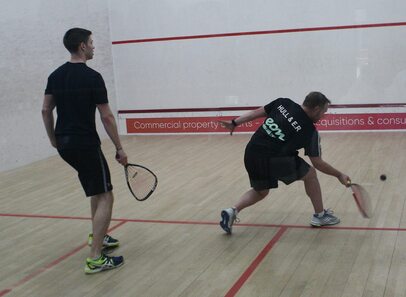 This will be the 8th year that the HEAD UK-Racketball Series returns to one of the best Racketball clubs in the UK, Hallamshire for the North East Open.

Past events at the Sheffield club have been some of the best in the country with a good number of both national and local entries. It will be important to get your entry in early for The North East of England this year, as the event has a reputation for being one of the best on the calendar and selling out early.

The 2022 Hallamshire Racketball Open was a busy one once again! Mike Robinson picked up his first title of 2022 by beating local player Tom Turner in a quality final. The B Grade was won by Nick Moore, with the relentless Ryan Loska taking the O40s in typically solid style. Jason Russel continued his early series form collecting his second title in a row against Paul Dodds in the O50s, Robin Chipperfield also getting on the scoreboard in the 60s, Graham Holmes taking runner up spot the second event in a row. Ian Graham started out his 2022 Series Campaign in the O70s well, by taking the title against the Broxbourne winner Graham Greensall, and in the Doubles it was an all Yorkshire Final, with Mills and Langham seeing off Hindmarch and Glencross to take their first Doubles tournament win!

Hallamshire is home to squash legend Nick Matthew. Players taking part in this year’s UK-Racketball event will have the chance to play on the Nick Matthew Championship Court. The club's Racketball section is one of the strongest, if not the strongest in the country, with plenty of group sessions running each week.  The club runs a very successful racketball junior section on a Saturday morning, midweek women’s sessions and a very successful summer league. Get ready for potentially another strong local entry in 2023.

​The North-East of England Racketball Open saw a return to Sheffield as we once again visited Hallamshire, home to the British Open and many of our series competitors. The event took place on Saturday 19th March, and with a good mix of local entrants and series regulars the tournament promised to deliver some competitive matches all the way through - and it certainly didn't disappoint! 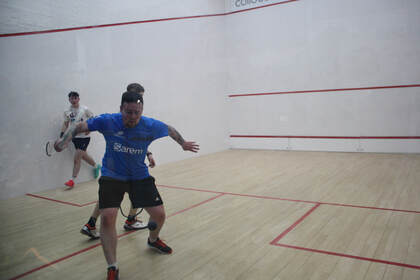 For the first time on the UK Racketball Series, the North-East Open kicked off with the doubles grades to get the day off to a smooth start. In Group 1, local players Chris Mills and Adam Langham cruised through the group without dropping a game, setting the standard early on in the day.

​Over in Group 2, the honours were contested between series regulars Nick Moore/Paul Norton and Alex Glencross/Daniel Hindmarch. Some good racketball from both pairs eventually saw the local duo of Glencross/Hindmarch through to the final. It was a great effort from both of the Hallamshire pairs, but it was Mills/Langham who closed out the match 11/7 12/10 to take the honours in the doubles.
The Over 70's saw some high quality from the most experienced age group. After winning their first matches, series regulars Ian Graham and Graham Greensall set up yet another final to contest the title. Despite having an extra game in his legs from earlier rounds, Ian edged past Graham 11/9 11/6 to add to his growing list of titles. 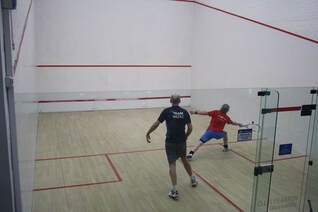 The Over 60's was stacked with some of the big names from the series, as well as some newcomers looking to upset the day's proceedings in their first UK Racketball Series event. In Group 2, Graham Holmes saw off the challenge of Mike Fleming to get through to the final. Group 1 saw some marathon matches, with Malc Bramley coming from 2/0 down to beat Paul Halstead 3/2. An outstanding effort from both players, it was perhaps a little too much work into the legs as Robin Chipperfield would go on to win the group and contest the final. In his first ever event, Robin won the Over 60's title, beating Graham Holmes 2/0 in the final.
As always, the Over 50's was one of the most competitive grades of the day, featuring a number of seasoned campaigners on the UKRB series. In Group 1, Jason Russell continued from where he left off in Broxbourne, cruising through the group without dropping a game. Group 2 came down to effectively a semi-final between Paul Dodds and Merv Davies, with Paul overturning a first-game deficit to win 2/1 and progress to the final. Jason would continue his imperious form, however, winning the final 11/6, 11/5 and adding another title to his tally. 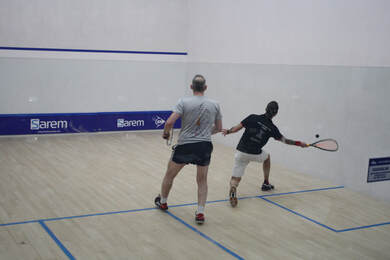 The Over 40's, while a small draw, was stacked with quality. Steve Smith saw off challenges from Russell Payne and Nick Jenkins to win Group 1, while in Group 2 it fell to Chris Mills and Paul Norton to halt the in-form Ryan Loska. It wasn't to be though, and Ryan came through the group to set up yet another final with Steve Smith, their third of the series. Despite a monumental effort from Steve, Ryan won the final 3/0, taking his tally to 19 Series Titles and moving one clear at the top of the All-Time Leaderboard.

The B Grade was the largest of the day, and featured a mix of series regulars and UKRB Series newcomers. After winning both their first games, Nick Moore and Tom Ash competed for a spot in the final. Some great Racketball from both, Nick took the first 11/7 before a huge defensive effort from Tom who took the second 12/10, sending the match to a decider. It would be the Dover man to get through though, as Nick took the third 11/8 and booked his place in the final. ​
Group 2 was dubbed the Group of Death, with 9 of the 10 matches going the distance. Both Tommy Meadows and George Beel saved numerous match balls over the course of the day, but it was Olly Jansen who won the group to set up a final with Nick. Fittingly, the final would also go the distance, as Olly took advantage of a flying start to take the first 11/5 before Nick responded with an 11/5 win of his own in the second. The pair would trade winners throughout the second, before Nick edged ahead in the latter stages and closed out 11/8 to take the title. 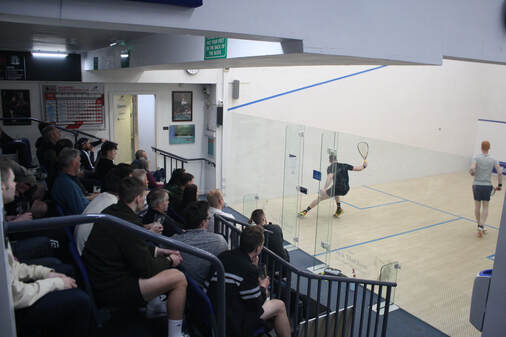 In the Open Grade, Michael Robinson and Chris Bentley kicked things off with a marathon five-setter, both players hitting outrageous winners and demonstrating fantastic retrieving. Michael eventually closed out the game, and would go on to win the group. Group 2 had its share of nail-biters, with Alex Glencross and Billy Hawes showcasing some fantastic racketball. After taking the first 11/7, Alex looked set for the win, but Billy refused to lie down and won the second 14/12. Both players saved match balls in the third, but it was Billy who won in the end, 15/13. Despite their efforts, Tom Turner came through the group in straight games to set up a final with Michael. A fast start saw the Surrey man take an 11/1 lead, but the home crowd got behind Tom in the second who fought back with some great defence and high quality attacks into the front. A comeback looked on the cards, but Michael dug deep and closed out the game 11/9. It would prove to be crucial, as a 2/0 deficit looked a step too far for the Hallamshire player and Michael closed out the third 11/4  to take the title for the 2022 North-East of England Racketball Open.

​A huge congratulations to everyone who played, and of course a big thank you to Tom Murton and the Hallamshire team, who always provide such a fantastic venue for the series. We can't wait to return in October for the Bluebell Wood British Racketball Open, as it's always a favourite club to visit.