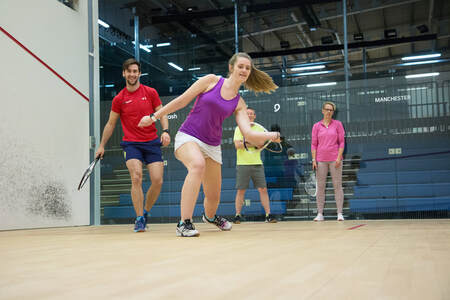 This page should provide all the information you need to get you started in Racketball. Below is a description of the game, why it is becoming so popular, a set of rules, and the history of the sport.

Racketball is the UK’s fastest growing sport! It is played on any regular squash court and is similar to squash. In racketball a larger ball, which does not need warming up like in squash, and a shorter racket are used, as shown below.

The fact that the ball is bigger, more bouncy and does not need warming up means that the rallies last longer, as the ball moves slower giving the opponent more time to react and get to the ball. The shorter racket also helps with hand eye coordination making the ball easier to strike. Overall this makes the game much easier to pick up than many other sports like squash or tennis. Racketball is said to be, "Easy to learn yet difficult to master" which is one of the key factors in the sports recent growth.

All equipment can be purchased from our online shop where there are professional reviews to help you choose what is best for you, all at the cheapest prices on the net. Click here to view the UK Racketball Racket Shop.

How to Play Racketball 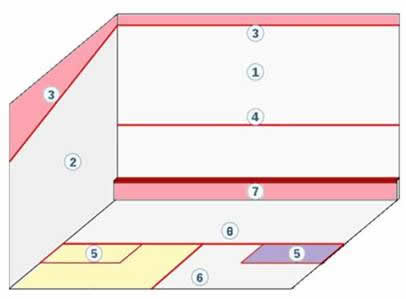 Here is a very basic summary of how to play racketball, for a more in depth description see the video and racketball rules section below or click here for Mark Fuller's beginners guide to racketball. This guide covers all the basic shots, how to play them, basic tactics and how to construct a good rally. For more advanced advice click here for the "coaching tips" section.

covering all the basic shots and strategies you will need to start developing your game and constructing good rallies.

Racketball is played between two players on a regular squash court (shown below). The players use standard size racketball rackets and a standard racketball ball.

The racket is spun to decide the serve. The server stands in either service box (5) and the receiver stands in the opposite back quarter (6). The server drops the ball to the floor and strikes it after one bounce. The serve can hit anywhere on the front wall but has to land in the back quarter in which the receiver is standing. If the serve is short of the mid court line (8) or if it hits the back wall first then the serve may be taken again. After the serve the rules are the same as for squash with the players taking it in turn to hit the ball. The rally ends when one of the players hits the ball into the "Tin" (7) or the floor, makes a mistake or hits the ball out of court above line (3). Scoring can be either to 11 with point per rally scoring or to 9 where serve must be held to score.

The Rules of Racketball

Below are the rules of racketball in two versions. The first set of rules has been simplified so that they are quick and easy to understand so you can get started straight away. The second set of rules are taken from the governing body England Squash and Racketball.

This is a simplified version of the rules specifically for beginners.

The Rules of Racketball: The 10 points and rules have been taken from England Squash and Racketball with added diagrams and notations.

What ball to use? 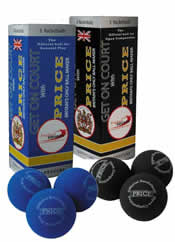 Here we have provided an article to help you decide which ball is best for you to play with. Balls can be either black or blue. The blue balls are more bouncy giving a slower game and the black balls have less bounce resulting in a faster game. Click below for more information on what ball to use.

In competitions we now exclusively use the black ball and recommend this as the best ball to use. It is important to remember that this might not be the ball for everyone and that it's important to use the equipment that is best for you.

Follow this link to see the full range of Racketball's
​

The difference between Racketball and Racquetball!? 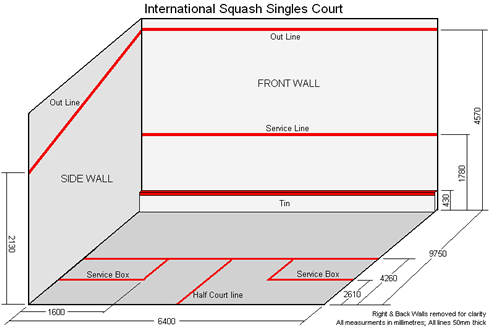 Racketball however is mostly played in the UK although more countries are taking the game up each year as the sport expands across the world.

The diagram opposite shows a regular squash court. All of the squash lines except the service line are relevant to Racketball. 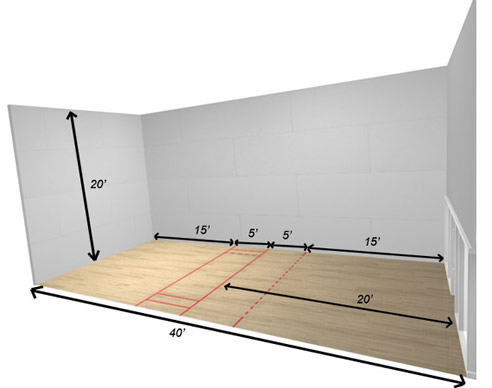 The ceiling and left side wall removed for clarity.

​The History of Racketball

The Origins of Racketball:


Ian Wright is regarded by many as the founder of the sport in the UK follow this link to see how it all started at Bexley Tennis and Squash Club in 1965 https://www.uk-racketball.com/rb-history-ian-wright-and-bexley.html


UK-Racketball interview John Robertson “Robbo” Level 4 Squash Coach one of the founders of Racketball at the Manor Squash and Racketball Exhibition. We ask him how it all started, the reason for the decline of many clubs in the UK and how things should move forwards in the future. https://www.uk-racketball.com/rb-history-robbo-brampton-manor.html
© 2020 UK Racketball . All Rights Reserved﻿