Baker and Lord lose in dramatic final!!
Click here for all the photos... 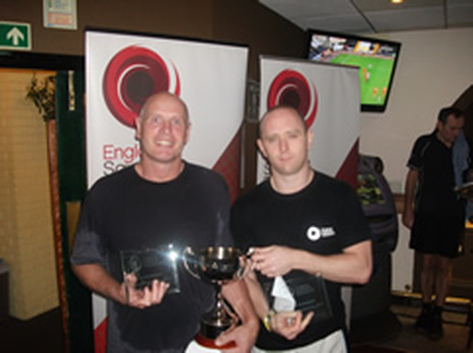 ﻿Racquets Health and Fitness Club in Thame Oxon, hosted the annual National Racketball Doubles Championship which saw a record entry in attendance.
A full sixteen draw in the Mens event was closely followed by a near capacity turn out in a quality based Mixed tournament, the Ladies category was played as a round robin with pairs guaranteed four matches over the weekend.
The England Squash and Racketball Championship was run in partnership with Simon Martin from Racquets with both parties very pleased with the events success. Simon commented “ As a club we are very proud to be associated with such a prestigious tournament and hope that the refurbished facilities that were kindly funded by ESR were to the liking of all competitors”﻿
The Mens clash proved an absolute classic between two times Champions Matt Baker (Devon) and Jim Lord (Yorks) and challengers Christian Turner  (Devon) and Rob Watkins (Avon). Most of the capacity crowd anticipated a comfortable victory for the illustrious pairing of Baker and Lord but the opposition had very different ideas as they stormed into a 2-0 lead, however, the reigning champions showed their determination as they rallied to level at 2-2, once again many felt experience would tell in the deciding set, but it was not to be as Turner and Watkins continued with their strategy of power and strength and prevailed 12-10 in the fifth set to a standing ovation.