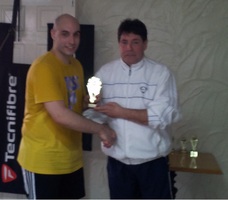 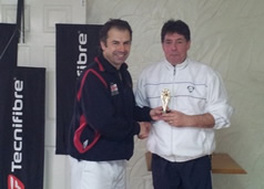 Weekends full report
In an action packed weekend that culminated in an outstanding, five set thriller in the final of the Men's A, players from ten different clubs in Norfolk competed in five different divisions in the first ever Norfolk County Racketball Championship at Broadland Sports Club this past weekend. 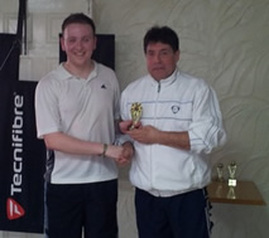 The Men's A Division was left wide open owing to the withdrawal of hot favourity Dan Calver from Diss, who had to pull out at the last moment with a hamstring injury. This left finalist from the most recent Grand Prix at Diss - Rob Hambrook as the number one seed, with former Squash county champion Richard Millman at 2 and Calver's Diss compatriot, Heywood Sports Club Pro Jack Bell at three. However, also in the mix was 'new to the sport,' former county Squash champion Matthew Bolt, in addition to Paul Gretton and Peter Scott from West Norfolk, among others. Gretton and Bolt had a great quarter final, Bolt coming through 3-1, while Scott took Jack Bell to five games in their last eight match up. Meanwhile Millman and Hambrook both won their quarters 3-0 against Phil Slack from Rossi's and UEA  and Kevin Cooke from Broadland's respectively. This set up semi finals between Hambrook and Bolt in the top half and Millman and Bell in the bottom half. In both cases the seeding was turned on its head. Although both matches were competitive. In a hard  fought encounter, Jack Bell came back from a 1 game to 2 deficit to overhaul number 2 seed Millman, while Matt Bolt saw of number 1 seed Hambrook in four hard games. 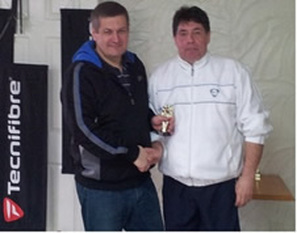 This left the final as a duel between the two lower seeds Matthew Bolt and Jack Bell. And what a match it was! Bolt's combination of shot making a clever pace variation was matched up against Bell's equally impressive shot selection and some explosive attacking play. After two games the match stood even and then gradually Bolt seemed to pull away, making few errors and drawing mistakes from his opponent. Leading at 2-1 it seemed that he was to take the title by three games to one, only to see a clear lead in the fourth game clawed back by Jack Bell, who forced the match into a fifth and deciding game. However in this game Bolt was able to substantiate his claim to the championships, pulling away with several key winning shot at crucial moments. Thus Matt Bolt is Norfolk's first ever County Racketball champion. Jack Bell played well throughout but could quite put  a stop to Bolt's inexorable shot making. In the other events Mark ( the novice ) Woolner took the first ever Men's Novice County Racketball title beating Kevin Willimott from Cromer, an exhausted Richard Millman beat an equally exhausted Peter Scott  for the 45+ crown, Broadland's Maria Rainbird beat club compatriot Debby Pardy for the Ladies Novice Title.David Hare, also from Broadland beat Oasis's Bruce Sadler into second for the 60+ trophy, 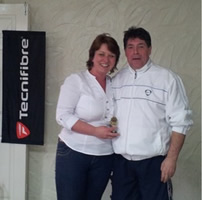 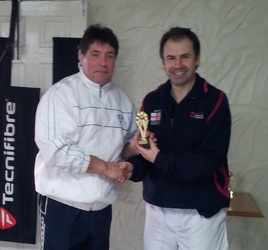 Jack Pearse from East Anglia beat a worn down Tony Henden from Broadland for the Men's A Plate title and finally Lydia Gotts Woolner was awarded the Girls U17 trophy - she being the only entrant! Broadland Sports club are to be thanked for providing a wonderful venue and a convivial atmosphere, especially Tony Henden's Mum Pat who provided cakes and sweet treats for all competitors.
Special thanks to Technifibre for providing the T shirts. We hope to be bringing you news of 7 or 8 more Racketball Grand Prix events at various clubs around the county.
Additionally we invite all of you to get your teams together and to let Kevin Cooke the county Racketball secretary have your entries for this summer's new Norfolk Racketball summer team league. Teams of four players rules and play off system to be advised at a later date. Thanks for your interest in Norfolk Racketball. Hit 'em tight! 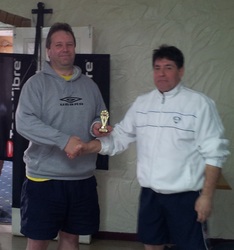 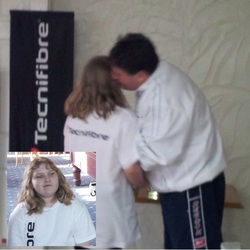 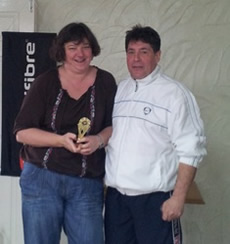 For full standings, photos and report, just click here to take you to the official Norfolk Racketball homepage.http://www.norfolksquash.com/racketball-county-closed-2012.html