Chapel Allerton played host to the first NE Regional Racketball championships the weekend of 6/7th February. This proved to be a fantastic success.


The new black Hybrid ball used for the first time in the Men’s A and B section was generally well received, with feedback from the players hailing it to be a great improvement compared to t,he previous black ball used.


The tournament attracted a huge entry of 66 competitors across 4 different grades in Ladies and Men’s sections, with many individuals playing their first external competition.


The A and B events consisted of 16 top players from around the region, whilst the biggest entry was in the C and D events.  These sections were aimed at the social/recreational club players.


There were some hard fought and exciting matches, and the Ladies A final was no exception with Paula Arrowsmith (Yorkshire Champion), defeating Julie Kitlowski from Hallamshire. Fellow Hallamshire players were also involved in the Men’s C final with Tom Murton narrowly overcoming Peter Hague. Also, in the Men’s B Final there was a great fight back by Matt Smyth from Collingham, coming back from 2 - 0 down, to defeat the Chapel A player Ian Cawthorne.


The Men’s A championship included a superb selection of top county players throughout, with the top four seeds achieving their expected positions in the semi-finals.


The first semi-final was between current Yorkshire Champion Dominic Hamilton (Heaton) and Ben Brown (Chapel A).  This proved to be a very hard fought match with Dominic narrowly prevailing 11/9 in the fifth.


In the opposite side of the draw No 3 seed Jim Lord (National over 35s Champion) from Phoenix beat the No 2 seed Neil Guirey from Chapel A 3/1.


Jim eventually defeated Dominic in the final, despite some fantastic retrieval from Dominic, with Jim using the two wall boast and back hand drop to great effect, to move his opponent around the court. The A event winners are shown bellow. 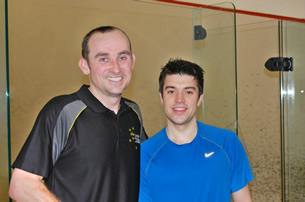 Above: A grade final winner Jim Lord (right) and A grade runner up Dominic Hamilton (left)

All in all, a much enjoyed and very well supported weekend.
Peter Edwards (Tournament Organiser)