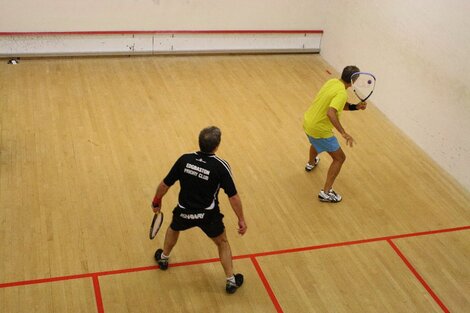 In the group stages all the seeds managed to make it through without dropping sets although Ross Proudfoot managed game balls against Galen Le Cheminant. Dave Palmer was just too quick for Simon Martin and Adam Grilli in group B although the local hero Martin did manage to cling on against experienced UK-Racketballer Grilli, taking the match 2-1 and earning himself 2nd place in the group.

In the end though the A grade was the Tom Phipps show. The victor at Chichester a month ago didn’t drop a single game all day and overcame the Dave Palmer and Elliott Selby’s semi final and final challenges with ease. Palmers quote after the semi summed up Phipps day “what can you do when someone just keeps rolling the ball out of the nick”. If Phipps keeps this up he is going to have a real chance to become National Champion in 2011.
​
Victory for Phipps has taken him to the top of the series rankings, earning him the title UK-Racketball Series Champion and giving him a place in the Fantasy Squash PSA $5000 Challenger in August at Nottingham Squash Club. 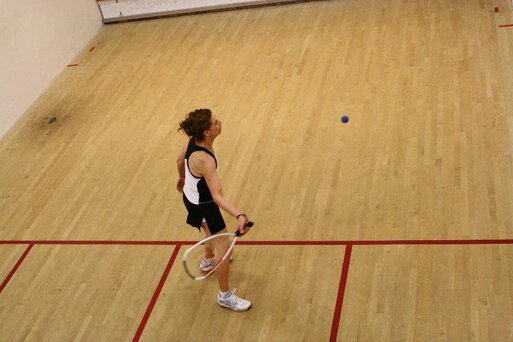 It was a strange tournament format in the women’s, 8 groups with only 2 players in each group leading into 3 playoff groups for the first round losers and straight knockout for the winners.

In the quarter finals Kathryn Milne took Jo Moseley close before narrowly losing 2-1 and Catherine Limb took “The Manor” victor Matilda Parslow to a deciding set.
The semi finals were both relatively straightforward with Natalie Lawrence overcoming Moseley 2-0 and Bethan John defeating Parslow. Both Moseley and Parslow move well but in the end the hard hitting of Lawrence and John was just too much.

​The final was the one predicted at the start of the day and was always going to be a great contest between Natalie Lawrence and Thame’s Bethan John. Both hit the ball hard, looked to control the middle and play their opponent to the back of the court so with similar games it was up to one of them to dictate. It was John that made the better start but Lawrence fought hard and battled right back in the 2nd to almost force a deciding set but John played well all day and claimed her first title at her home club.
A special note has to go to the Chapel A women who have travelled to many of the events this year. If it wasn’t for the effort that they have put in to travel round and compete the tournaments would not have become what they have. We are now in a position where loads of women from other clubs now travelling to play the events but if it wasn’t for the support of Chapel A the women’s grade may have never got off the ground and we would definitely not be in the position that we are in now with a women’s grade being run at every event in the calendar during 2011. 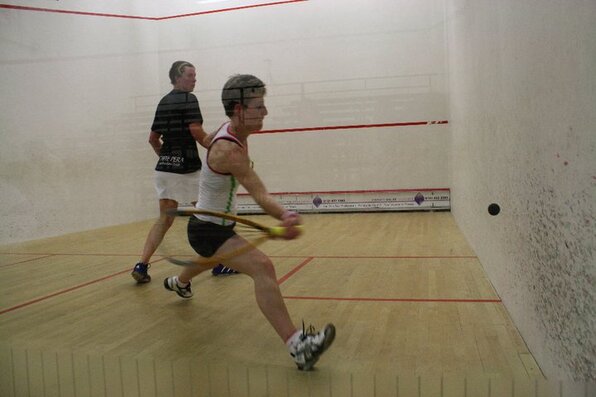 ​4 full groups of 4 and as always some of the closest matches of the day happened in the B grade. David Heron again made it through to the knockout stages taking group A without dropping a game. In group B Stephen Elliott battled all the way against Matthew Compton and couldn’t have come closer to taking the game and first place in the group. It was youth that overcame experiance in Group C and D with Ben Webster and Alex Musslewhite earning their places in the semi’s.
The first Semi final was a repeat of the semi final in Chichester a month ago between Heron and Compton, it was role and result reversal at Thame however with Compton this time coming through the stronger and consigning Herron to yet another defeat in the knockout stages of the B grade. At 7 of the 8 events this year Herron has made it through the groups only to be defeated in the knockout stages making him probably the most consistent but unlucky player in the series. In the other semi Musslewhite ran hard against Webster but in the end the youngster from Hallamshire just didn’t have enough to close out the match.
It was another fantastic final in the B grade with both Compton and Webster able to retrieve everything the other one threw at them, with neither player looking likely to hit winners it was a battle all the way through. There were rallies where players tripped, managed to get up and still bust a gut to get to the ball, keep it in play and then the rally went on and on.
It was a great effort from Compton who had to battle right from the start in the group stages but despite tough battles all day he was the one left standing in the end taking the B grade crown.

​It was another great beginner’s tournament with matches between players who have only just taken up the sport. Local boy Will White fought hard all day and came the closest to defeating Dariusz Wanatowski losing 2-1 in what would prove to be the beginners grades deciding match.
A special mention also needs to be made for Jake Mackin who really has only just taken up the game and ran as hard as he could throughout the event.
“I would not be playing racketball if it were not for the UK-Racketball Series” said Thame’s Beginners grade champion Dariuz at the end of the day, let’s hope next year we can encourage even more people to try their hand at the sport. 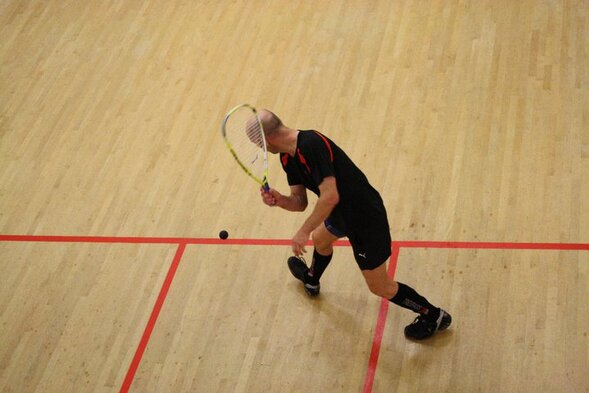 England number 2 Marc Thornley came through group A comfortably against Daryl Hicks, Ian Milner and Neal Waters. In contrast Mark Webster was pushed all the way in group B by both Nigel Stone and Mark Benson. Mike Phillips and Ian Furlonger made it through in the 2 smaller groups, C and D setting up 2 competitive semi finals.
In the top half Webster played well against Thornley who seemed to lose his way making an uncharacteristically large number of mistakes. The first game in the bottom half was brutal between Furlonger and Phillips. Phillips was finding a great length and moving the ball around but Furlonger was battling hard, not making mistakes and forcing Phillips to hit lower and lower in his attempts to find winners. Phillips eventually took the first game on tie break before easily taking the 2nd 11/1. Speaking to Phillips afterwards he said “I pulled my calf at the end of the 1st, from then on I just had to slow the pace down and really focus on where I was hitting the ball, I’m not really sure why I didn’t do this from the start!”
Unfortunately despite going on for the final Phillips was unable to compete and quickly conceded, giving Webster his first title. Phillips injury took nothing away from Webster who played some great racketball all day and is going to be a handful for anyone in the Over 40’s.

Over 50’s
​
Nigel Millington again made the final in the Over 50’s without dropping a single game in either the group stages or the semi final where he defeated Wayne Burns.
James Murphy made it through to the knockout stages winning group D and then faced Gabriel Uttley in the Semi Finals. Uttley had to battle hard to make the semi, losing group stage games to both Bill Smith and Philip Clarke. Uttley played well in the semi however coming through strongly against Murphy in straight sets.
The final was a strange match with Millington flying to an early lead in the first only for Uttley to save countless game balls and then take the game 12/10. In the 2nd and 3rd however Millington was in control and despite fighting hard right to the end Uttley just didn’t have enough to stop Millington again taking a UK-Racketball Series Title. Millington lived up to his description in the program, his 2nd tour title in a row and he was 1-0 down in the final of both, he really does never give up!
​Message about the UK-Racketball Series
It has been a great series this year. All grades have run at all venues and we have had some massive draws. Next year’s series will hopefully kick off in either March or April and will run to a very similar format to the one this year. We will soon be doing some “facebook surveys” to get your feedback on how the series ran this year and to see if there are any changes that you would like to see ahead of next year. Questions will include what balls would you like to see used, are there any new grades that you think should be included and which was your favourite venue.