​We decided early in 2023 to make the change from having two events very close together (Lee on Solent and Chichester,) to switching things up and introducing a Central England event in Bristol!

Bristol and it's surrounding counties (including the Welsh contingent) has always been an area that we have been keen to set something up in. It's central location and M4 and M5 joint access gives it the potential to be a brilliant location for us to get a Series event going in. So it is great that we have been able to partner up with Bristol Lawn Tennis and Squash Club and get our 22nd April event up and running there!

BLTSC has long been one of the most active and busy clubs in the Bristol area, with 6 Squash courts, 8 tennis courts, plus soon there are Padel courts on the way. It has 7 Mixed and 4 Ladies teams in the Bristol District league and a steadily building Racketball section too. You can check out their website here: redlandgreen.co.uk/

Don't miss out on the chance to get involved at a brand new UK Racketball venue in a great city to visit. All entries can as always be done at Sporty HQ via this link. (Please ignore the link text, it is the correct one!):

Can't wait to get going!

For more information, contact admin@uk-racketball.com or if you enquiry is urgent call Mike on 07789 394617
​

If you are unsure which category to enter please feel free to contact Mike directly on 07789 394617 or email us at admin@uk-racketball.com and we will be happy to advise you.

BLTSC has 6 excellent Squash courts], plus a great open bar space with views out over their busy tennis courts. They have a good sized car park but players can also park on the roads surrounding the club too if things get busy.

BLTSC is situated in the picturesque northern part of the city with easy access off of the M5 and M4 motorways. Nearby (10 minute walk from the club) Whiteladies and Gloucester Roads have a fantastic variety of restaurants, cafes and bars capable of catering to any tastes! The club is a 5 minute drive into the city center of Bristol with all it has to offer with its harbourside and it's vibrant social scene. 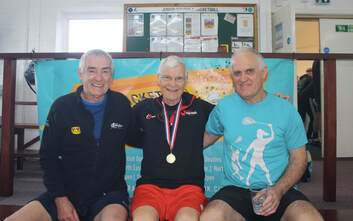 Our first visit to the Lee-on-the-Solent Tennis, Squash and Fitness club was a huge success! We had a fantastic mix of series regulars travelling from across the country, as well as a strong local showing from Hampshire Racketballers, which made for some fascinating match-ups and competitive grades throughout the day. A huge thank you to the LOST Club, Jodey Watts, Solent Fire and Security, and of course all our series sponsors for 2022.

Over 70's
The Over 70's was a 4-Way Round Robin, and saw a great effort from Hampshire's Johnny Jacob and Paul McCartney who fought valiantly against two of the most experienced UKRB Series players on the circuit. In a repeat of the North East final last month, old rivals Graham Greensall and Ian Graham battled it out for the third Over 70's title up for grabs this year. It was a similar showing, with a close first game that swung either way until Ian closed out 11/9. Ian would then pull away to take the second 11/5 and add another title to his collection. 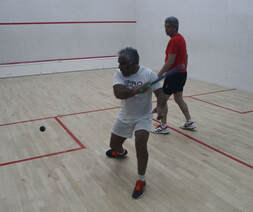 ​Over 60's
A slightly depleted draw gave the Over 60's players the chance to really battle it out with some Best of 5 encounters. After a brutal five-setter with Graham Holmes, Akhtar Khokar came through Group 1 to book his place in the final. In Group 2, it was Graham Appleby who came through as group winner in a slightly more straightforward manner - winning both his matches in straight games. This perhaps proved the difference going into the final, as Akhtar couldn't quite maintain the pace and Graham, thanks to some exceptionally high-quality racketball moving the ball to all corners of the court, pulled away to win the final and take his second UKRB title. 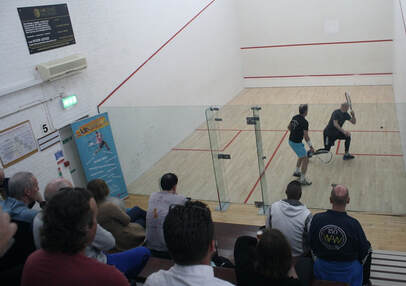 Over 50's
The Over 50's, as ever, was one of the biggest draws of the day and saw some great racketball across all the groups. UKRB Series veteran Marc Thornley came through Group 1 unscathed, although he was pushed hard by Jason Ponting. Joining Marc in Semi-Final 1 was Paul Dodds, who earlier on won his group by winning 3 matches in straight games.

In the bottom half of the draw, Phillip Hall returned from injury and looked like he was on for a successful return to the series. He won his first two matches but was eventually defeated by Roger Camp, who would go on to top the group. Roger was joined in Semi-Final 2 by Jonathan Edwards, who'd played quality racketball throughout the group stages and was loving the new SportyHQ app!

Semi-Final 1 was one of the best matches of the day, as Marc and Paul played some brutal racketball with the former eventually winning 13/11, 11/9, 11/8. Roger Camp took on Jonathan Edwards in another exceptional semi-final, with Roger winning out 3/0. It was destined to be another tie-breaker in the final, this one going Roger's way as he won the first game 12/10. He took full advantage of that crucial win, taking the next 11/7 and winning the title for the Over 50's.

Over 40's
The Over 40's was a single Round Robin group of 4, but it was perhaps the closest group of the day with 3 matches going the distance and 3 players each finishing on 4 points with 2 wins and a loss. With every player winning the same amount of games - 5 from 8 - it came down to SportyHQ's fantastic new feature to break the tie - a points countback. With that, Paul Norton came through as the Over 40's Champion, winning 57.33% of his points played. Paul Holdway came through in second on 54.05%, and Phil Borrett in third on 51.68%. A brutally competitive Over 40's grade with fantastic racketball all-round.
Women's
This was a really nice match between 2021 UKRB Series Champion Amber Marshall, and UKRB Series debutante Lois Hutchinson. It was great to see a newcomer stepping up to take on last year's champion, with Amber winning it 3/0. 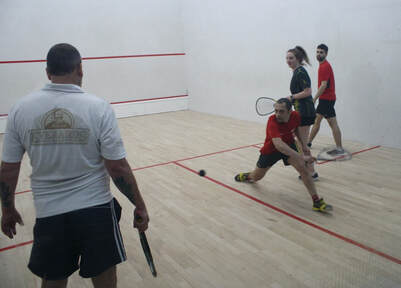 Doubles
Another good showing for the Doubles, which has been really popular all year! Amber Marshall and Luke Bishop dropped their first game of the day against Roger Camp and Phil Borrett, but came back strong to win 2/1 and come through the group as winners. Jodey Watts and  Jordan Carrier played some great racketball in the doubles, battling hard against some of the biggest names in the series and pushing them all the way.

In Group 2, it was Paul Holdway and Neil Moore who came through as the eventual winners, but they had to do it the hard way as they were pushed to a decider in every match, showing just how tight the group was. The final proved a step too far for Holdway and Moore, however, as Marshall and Bishop proved they are still the pair to beat on the UKRB Series Doubles scene with an 11/5 11/4 victory. 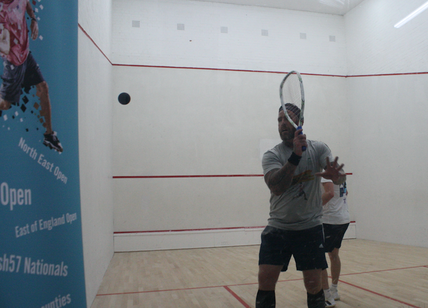 B Grade
3 groups in the B Grade saw 12 players battling it out for a chance to play in the winners' group at the end of the day. Alex Kershaw came through Group 1 as the winner; Jodey Watts won Group 2 with 3 straight-game victories; Adam Giles winning Group 3.

The finals was one of the highest-quality B Grade Finals we've ever seen in the UKRB Series, with some incredible racketball being played throughout. Jodey Watts came in third, fighting brutally hard to force tie-breaks and deciding games against both opponents. The decider was between Adam Giles and Alex Kershaw, with Adam coming through as the eventual winner thanks to some strong physical racketball and quality hitting - definitely a player to watch out for in the Open Grade in the future!
Open Grade
The Open was a highly condensed draw, with 4 players of exceptional quality battling it out for the title. A great match between Luke Bishop and Callum Arnott saw Luke win 2/1 after dropping the first game. In the last match of the day, Luke took on Michael Robinson in an effort to secure the title and extend his unbeaten run to 25 matches. It started badly for Luke, with Michael winning the first game 11/5, and nearly turned to disaster for the Devon player as he surrendered two game balls in the second to go to a tie-break. He kept his cool, however, and managed to find two fantastic winners to take the game 13/11 and level the match. The third saw some more brutal racketball - Luke had spent a fair bit of time on court between the Open and the Doubles, and Michael made him scrap for every last point, but eventually it was Luke who claimed the decider 11/8 and proved he is still the player to beat on the UKRB Series circuit.
A big thank you especially to Jodey Watts from Solent fire and Security for making this event happen, and we look forward to returning next year!

Next up is another UKRB Series first as we travel to Liverpool on the 7th May for the North-West of England Racketball Open. Click the links below to find out more, and to enter.
https://www.uk-racketball.com/e4---north-west-racketball-open---7th-may.html​ 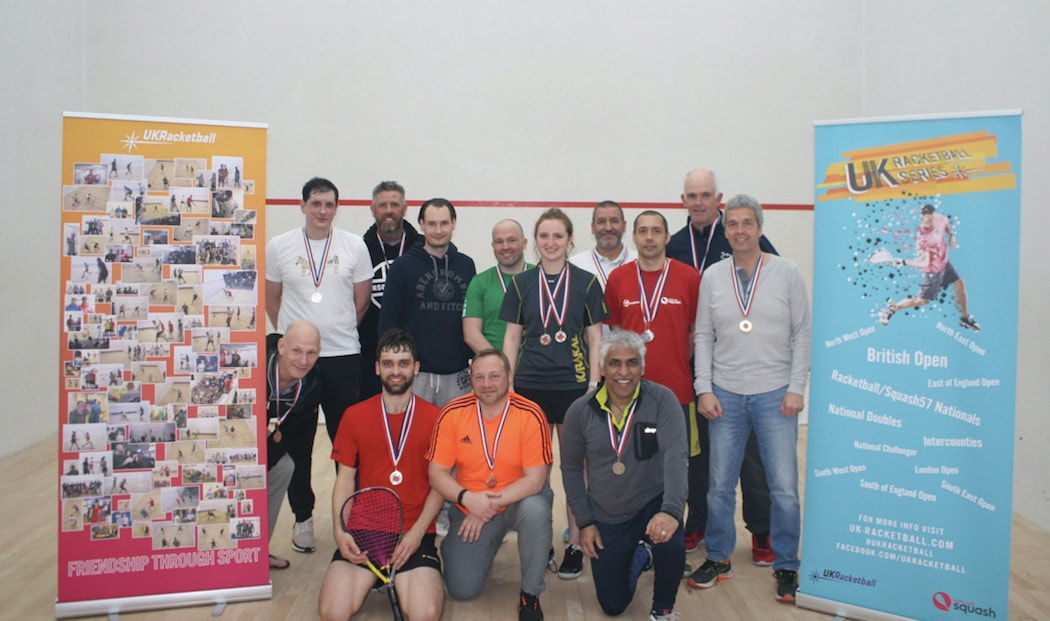