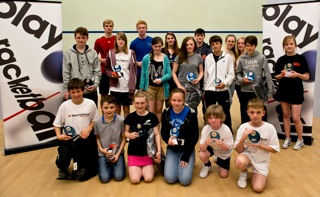 Over the weekend of Saturday 11th12th May, over 40 juniors from around the country took part in the “Tecnifibre National Junior Racketball Championships” at Hallamshire Tennis and Squash Club, in Sheffield.

Now in its 4th year, the Championships ran a total 10 events for both Girls and Boys:  Under 11, 13, 15, 17 and 19, which culminated in some inspiring finals on Sunday afternoon.

John Mullins, Hallamshire’s Head Professional Squash and Racketball Coach, said this was a fantastic event filled with excellent matches and great support from friends and families of the competitors, for some of whom this Championships was their first ever tournament.

At the finals trophy presentation, both Matilda Parslow and Hamish Falconer thanked the organisers for providing markers and referees which took the pressure off the competitors between matches.

BU11 event (MONRAD) saw  Hallamshire’s own Leon Moshin take the title in what was his first tournament.  He played some fantastic matches and embraced the event as a true professional!

BU15 (round robin)  was a close event with Stourbridge’s George Snowplaying his first National Championships claiming the title and Nick Wall (Abbeydale) as runner up.

GU17 (MONRAD) saw Grace Spink (Hallamshire) cause an upset as No 4 seed by defeating No 2 seed Hannah Mulvey (Bishops Stortford) in an earlier round.  Grace was this year’s runner-up and Lucy Ward won the GU17 championships.

BU19 (MONRAD) saw Hamish Falconer (Lincolnshire) reach the final to defend his 2012 title against Ed Walker (Buckinghamshire) in a tantalizing and inspiring final.  Hamish overpowered his opponent to win in 3 games

GU19 (MONRAD) was an excellent event culminating in an epic final betweenMatilda Parslow (Leeds) and Lucy Ward (Hallamshire).  Some top class and inspirational  racketball was played with both players dominating the long rallies and playing to their limits.  Matilda managed just hold on to her 2012 title, with a 3-1-win  (11-6 /8-11/11-8/13-11).