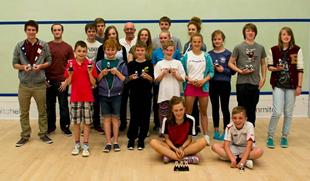 The 2013 Junior Racketball Championships culminated in some high quality performances in the finals that took place on Friday 21st June.

Over the course of the Championships, 92 players have played in various events in each of John Mullins’ Saturday morning squad training sessions.

The Finals night was a great success, with a fabulous turn out of both competitors and their families and friends who came along to support our future stars!

Well done to all juniors taking part from all of us here at UK-Racketball!