The first ever Scottish racketball series has now been launched. There are 7 events in the series at some of the best clubs all over Scotland. All events are to be played over one day. All tournament entrants will gain points towards their Official UK Racketball Ranking as well as the Scottish Satalite Tour Rankins.

Dumfries Squash Club was well-represented and came away with two National Champions. Firstly, Raymond Kirk won the O-60s with hard-fought round-robin matches especially against Fred Laing, the eventual runner-up, and Ron Pearman whom he defeated 3-2 in the final match to secure the title. In the O-45s Mike Service provided the surprise by winning all his round-robin matches 3-0, particularly since two were against experienced local Dumfries players. Jim Scriven was runner- up.

The O-35s consisted of a 5-man round-robin with Ian Furlonger from Crewe, an experienced English tournament player, winning the title without dropping a set.

The O-50s attracted the largest age-group entry with 12 players vying for the title. Of the local players, Colin Davies from Castle Douglas fared best by making it through to the semi-final before being defeated 3-0 by James Murphy from Preston. In the other semi-final Jack Gilchrist defeated Whitecraigs' Scott Morton 3-0 to set up an all-Preston final. In the final Murphy defeated Gilchrist 3-1.

In the O-55s James Murphy won the 3-man round-robin despite a valiant effort by Harry Gould from Helensburgh going down 3-2 in the final match. Gould finished runner-up.

The Open event attracted a 15-strong entry aiming to become the first-ever Scottish Open Champion. After two rounds of play on the Saturday, the semi-finals on Sunday pitted Chris McCutcheon, Dumfries Squash Club's current racketball champion, against Keith Gristwood. The first set was tense and close with Gristwood taking it 11-8, only for McCutcheon to take the second set 11-3. The third set went to Gristwood 11-3 and in the fourth he missed the chance to clinch the game at 10-9 and lost 12-10. So two games all and into the fifth and deciding set which was becoming more tense by the minute with the scores tight until 5-5 at which time Gristwood opened up a two-point lead and after further exchanges of points Gristwood went on to win 11-7.

In the other semi-final Jason Broadberry disposed of Alastair Ross from Inverness in straight sets. The Open Plate final saw Mike Service overcome Joe O'Byrne 3-2 albeit O'Byrne made a fight of it after coming back from 2 sets down.

The Open Final matched Broadberry against Gristwood. The first set saw Broadberry open up an 8-5 lead and looking in control only for Gristwood to come back strongly and take a 10-9 lead. At game-ball he put a front-court boast down and Broadberry took advantage and won the first set 12-10. The second set saw the match become more tactical with rallies getting longer - to the extent that one rally went on for over 80 shots and nearly five minutes. In the end Broadberry secured the set 11-6. The third set was also tight but Broadberry finally took it 11-7 to claim the first-ever Scottish Open title.

At the awards ceremony Dumfries Squash Club Chairman Keith Gristwood stated "it's been an honour to host the inaugural Pathfinder Scottish Open Racketball Championships and we are particularly grateful to all our sponsors and donors without whom we would be unable to host such a prestigious event, and to all the players who made the tournament a great success". He also thanked the main sponsor of the event, Pathfinder Park Homes Ltd, together with DuPont Teijin Films, Print.Copy Centre Dumfries and Anderson Fire & Rescue Products and grant assistance from Nithsdale Sports Council. The awards were handed out by Ron Pearman, President of Scottish Squash & Racketball, and by Ray Currie representing Pathfinder Park Homes Ltd. 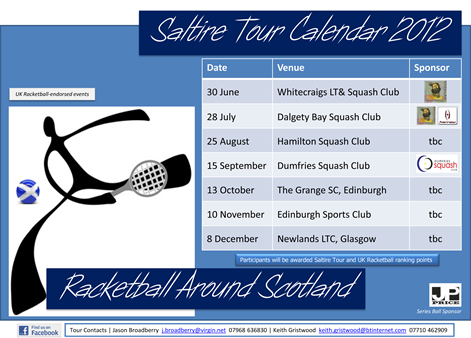