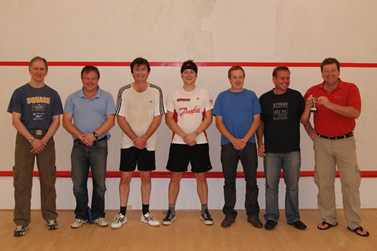 In the main draw, the quarter finals threw up four intriguing matches. Number 1 seed Thomas “Harry Phipper” Phipps was clinical in beating Chesham’s up and coming youngster Charlie Yerrell. QF 2 was an all Thame affair and Simon “The Entertainer” Martin had a close-run victory over “Grumpy” Greg White. QF 3 pitted Aylesbury’s “Tin Man” Craig Bartlett against current County Champion Andy “Clubber” McDonald. After a battling first two games, during which honours were shared, McDonald’s engine proved superior on the day and he was able to wrap up a hard fought 3-1 victory. The last quarter final saw Aylesbury’s Dave Herron put up a valiant but ultimately futile effort against the experienced number 2 seed, Steve Bateman.


In semi final 1, Former European Champion Simon Martin, who despite being of delicate stature, manages to always make his opponent run the “long way round”, took on number 1 seed Thomas Phipps. Martin lived up to his nickname and the match was thoroughly enjoyed by the gathered spectators, but Phipps’ pace and power were unrelenting, giving him a 3-0 victory.


Semi final 2 promised much; Clubber McDonald against “Wiley” Steve Bateman. The first game witnessed some punishing rallies as both opponents sought to get the upper hand. In the end the relentless attacking play from Bateman took its toll on Clubber, whose legs were still slightly heavy after his tough quarter final. Bateman clinically finished off his battered opponent, taking the match in 3.


The championship final pitted Phipps against Bateman. The awesome Phipps used his relative youth and superior speed and power, taking a 3-0 victory over the impressive Bateman, and rounding up his perfect tournament which saw him achieve victory without even dropping a game. What a player!


In the Doubles final, Aylesbury’s own Phipps and Herron took on local rivals Martin and White. During a hugely entertaining match, the solid Herron ably supported Phipps’ extravagant shot-making and the pair ultimately proved too strong for the tiring Thame veterans, taking the match 3-1.
In the plate final Aylesbury’s Simon Townsend took a while to wake up, but once going, he secured a comfortable 3-1 victory over Robert Rickman from Gerrards Cross.

Overall the event was a huge success and the Club would like to thank all that took part. Special thanks must also go to John Phipps, a long time Aylesbury stalwart, who provided all of the trophies.


The club is actively seeking new members of all ages and abilities. If anyone would like more information on Racket sports in Aylesbury, please contact Craig on 07738 667018.