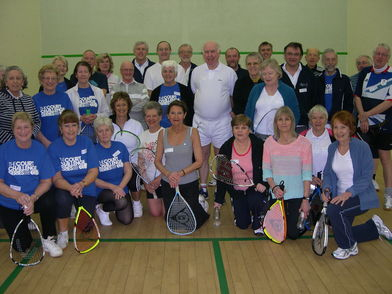 There were 4 categories: Elite Men, Elite Ladies, Mixed Improvers and Beginners. Each category was divided up into Mini leagues of 4-6 players. A Round robin format of matches was used with a final play off match to determine their overall position. This meant everyone played atleast 5 matches against players of a similar ability.

After the 1st bell to start matches at 10.30am the tournament ran so smoothly, with players waiting behind the court door to move in for the next match. Volunteer Court organisers’ recorded and added up scores, to achieve a total score and thus a ranking within the league. Improver Chris of Ilkley commented ‘the way this tournament has been run is so professional; all matches have run like clockwork. The organization has been fantastic’. Newcomer to racketball Andrew from Craven said ‘I’ve had such a great time, the competition has been intense, but my opponents have been so friendly’.

A group lunch was enjoyed by all in the Café Bar and as players mingled and reflected on rallies and points won and lost, the atmosphere was vibrant. Carol then reminded everyone of the positive benefits of being active and having fun on and off the court, as current research has suggested that this can extend one’s life by up to 10 years!

The winners and runners up in each category were presented with trophies by Steve Amos (ESR Head of National Network).

The most remarkable fact about the U3A players was that the almost two thirds of them had taken up racketball during the last year and of these they all currently play either once or twice every week. In fact the winner of the Beginner category Sue Roberts said ‘I’ve only been playing since the beginning of February, but as I’m a tennis player I have found it easy to adapt to, and it’s great to play inside on nice warm courts’.

According to Gunilla (Ilkley) she thought ‘Every time we go to a U3A Racketball tournament run by ESR they get better and better. We’ve had a brilliant time today and it was so nice to see all the courts taken over by Racketball!’

In the closing address players were reminded of the ‘U3A Grand Racket Day Out’ on 21 May to Hull. U3A members are invited to attend: an exhibition racketball match featuring 2 nationally ranked players; and watch world class squash at the Allam British Squash Championships at the Hull KC stadium; both for the discounted price of only £5.

Also it was announced that the next inter U3A Racketball tournament will be held at Abbeydale Park Rackets & Fitness Club, Sheffield in July.