Women’s Grade – With the massive success of the women's grade in 2011 UK-Racketball has decided to continue with a ladies only grade which will be run at every event.


Top of the range prizes from the NEW Harrow racketball range – The UK-Racketball Series will have the same main title sponsor as last year, Harrow who will again be supplying us with rackets from their new top ot the range rackets. Check out the UK-Racketball Racket Shop for reviews on what you could win! 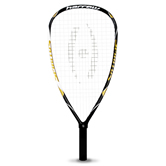 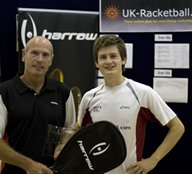 New clubs and events - This year UK-Racketball will be running 8 series tournaments. We have selected some of the best locations for racketball all over the UK with an outstanding portfolio of top clubs.


New sponsors – We have a number of new sponsors as well as many existing sponsors who have come on board to support the 2012 Harrow UK Racketball Series. Please support them and check out the sponsors page for more details.
Tournament Format
The tournaments will be 1 day events with the aim of attracting maximum participation. The tournament format will be either group stages through to knockout, monrad or straight knockout, depending on numbers of entries. We will always ensure that every competitor has at least three, best of three, matches. Scoring will be American to 11 and best of 3 games. All the tournaments are sanctioned by England Squash and Racketball and have grade 1.5 statuses. Our sponsors Harrow will be providing prises from their new range of racketball rackets for all grade winners and runners up except for the beginners category. There will be: 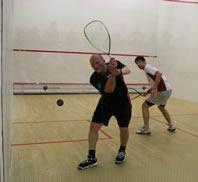 Women’s – We would really like to keep expanding this category for 2012 with the aim of getting enough numbers to be able to split it into two grades. The grade is for any standard or age of player.

All balls used will be as specified by England Squash and Racketball, unless stated otherwise.
The club locations and dates are:(Please click on the buttons below for more information and entry)
- The Manor
- ...

UK Racketball is always looking for sponsors for the Series:If you are interested in sponsoring The Harrow 2012 UK-Racketball Series we have packages that start from as little as £100.

With UK Racketball you could have a nationwide advertising campaign for only £200.

We have strived to put together packages that will not only bring exposure to your business but directly drive sales.