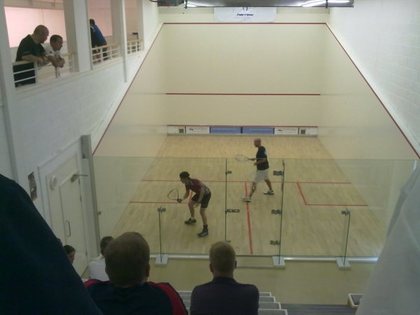 The Nottingham Racketball Open was the first event in the UK-Racketball tour. As tour organisers both Will and myself were definitely nervous about how the event would go. A lot of work has gone into UK-Racketball and the hits that the website receives have been really positive, but this was the first time that the project really could fail.
We probably made the task even harder for ourselves by selecting Nottingham as a venue. One of the main reasons for this was that for a couple of years I have been trying to get Racketball off the ground yet there is still almost no Racketball being played at the club. We thought that the tournament would be a good way to showcase Racketball and get the club members involved. Last year however the club attempted a similar plan, hosting its own graded tournament, as this only received 3 entries there was definitely cause for us to be nervous. We contacted everyone we could think of over the tournament and I think through the combination of the website and the many coaches and Racketball enthusiasts that we have been in contact through the site we managed to get the word out. In the end there were 45 entries for the first event, it was going to happen. There was now just the small matter of getting organised enough to run it. It was a good job Nottingham has a lot of courts as we were going to need them.

Looking at the draw I think that other than the National Championships this was probably the strongest racketball tournament to date. Dom Hamilton England number 7 (no 1 seed), Matt Baker England number 8 (no.2 seed), Gavin Perrett England number 12 (no.3 seed) and Christan Turner England number 21 (no.4 seed) and 3 local professional squash players in Eddie Charlton, Mark and Chris Fuller, Laura Hill (5 times national ladies champion) were all in the draw. It was great to have Ed seeded at 6th in the draw. I don’t think the members of NSRC could remember him being seeded anything other than 1....ever! It really helped to show that racketball was a serious game that attracted top players with great ability.

Round 1
In the first round Gavin Perrett was pitted against Chris Fuller in what turned out to be one of the real squash-racketball clashes of the day, but despite going 9-3 up in the first Perrett failed to capitalise with Fuller getting everything back and leaving a frustrated Perrett with very few options. In the end from 9-3 down Fuller only dropped another handful of points taking the second 11-1.

Round 2
In the second round Matt Baker had the draw no one wanted against Laura Hill. Laura is not used to losing at racketball haven won 5 national titles in a row but in the end Baker managed to twist and turn her too much, taking the match 11-3, 11-7. Talking to Laura afterwards she claimed that she was getting progressively better at reading the boast and cross as the match went on and thought she might have had measure of it by the end, better watch out next time Matt.
Round 2 saw a couple of other great matches with James Powley besting Neil Rossin, Chris Fuller grinding off Eddie Charlton in one of the longest best of 3’s of all time and Dan Lawrence finally holding on to beat Michael Hennings deep in the tie break of the deciding game.

Semi Finals
It was no. 1 seed Dom Hamilton vs Mark Fuller and no. 2 seed Matt Baker vs Chris Fuller. Two profesional squash players (although Mark hits at racketball at least 3 times a week) against two of the countries leading racketball players, who would come out on top?
Racketball ended up being the comfortable winner. Although Mark got close in the first game Baker rolled Chris “mini” Fuller up like a carpet 11/4, 11/6. I’m not sure if he managed to see even one boast before it bounced twice. You definitely can’t play squash on a racketball court and expect to win, especially against Matt Baker.

Final
The last game contained some fantastic racketball, it was clear that if Hamilton could just extend the rallies long enough baker would tire and he would be champion but at 7-6 after yet another Baker winner it looked like the game could go either way. After a brutal rally Hamilton slipped only to quickly get back up and ask for a let, “yes let”, by the crowds reaction they definitely did not think he could get it but the score would remain at 7-6. In the end Baker just didn’t have enough and despite attempting the Baker boast right to the end it was a title for Hamilton 2 games to 1.

Maybe if it was a no let and Baker was 8-6 up he could have kept his mini lead and closed it out but we will never know. It was a brilliant spectacle for how racketball can be played and a great end to the start of the series.

The B event had a good feel to it all day, with some of the most competitive matches of the day, as well as plenty of fun and entertainment. The event pitted many experienced racketball players against some of the local Nottingham guys who played squash and decided they would give racketball a go making for an interesting event.
The first few rounds saw more and more of the locals lose to the more experienced racketball opponents until after the quarter finals there was only Jonathan Underhill left. This meant the plate was almost just a battle of the locals. Which after one of the most intense B plate finals of all time was won by UK-Racketballs Will Bennett defeating Sam Watts 12/10 in the 3rd, it has to be noted that Sam had already started on the beer before going on court, but still well done Will.

The semi finals came down to a battle between the top seeds, Jonathan Underhill vs Nigel Millington and Mark Webster vs Matt Stone. The four of them all had a good case to be in the A grade and had only dropped one game between them all day.
In the first semi Jonathan managed to just hang on to the second game 12-10 to take the match against Nigel and Mark saw off Matt 2-0 as well 11-4, 11-9. It was the top 2 seeds through to the final. In the first game Jon raced to an early lead with Mark looking like he had no idea how to kill the ball and neutralise Jon’s speed. Despite doing almost nothing with the ball the first game was Jon’s 11-2. The start of the second was a different story with Mark beginning to find length and hitting some winners. There seemed to be 2 points in it right through to the end with Jon’s fitness being just enough to seal the game and his first racketball title.
The B Grade had a fantastic entry with over 20 people in the draw, with almost all of them battling right through the monrad to the end. Well done to everyone who entered, it was a great competition.

The Mens over 40s turned out to be a tight competition. The two Nottingham local boys Ernest Radford and Leckie Dow (both of who I coach) came 4th and 5th leaving the tournament to be decided by the leading pack of Gary Culverwell, Paul Haigh and Rob Watkins. In the end Rob managed to come through and win only dropping one game to Paul, but the final scores show just how close it was with Gary finishing on 5, Paul on 7 and Rob on 8. A great competition and another title for Rob to add to the one he took in Lincoln 2 weeks before.

So that everyone ended up with their 4 matches as promised the draw for the over 50s had to take on a bit of a complicated format. There would be 4 groups with the winners and runner-ups then playing in their own mini tournaments to decide 1st and 5th place respectively, the final 3 in the groups would then play off for the 9th 10th and 11th spots.

Ian Dearle saw off Peter de Banke 2-0 to claim 9th.
John Fuller came out on top against Peter Banks to take 5th place.
Mike Philips bested Neil Overton and then James Murphy to claim 1st.
The over 50s was a great competition with a high level of both racketball and sportsmanship throughout. There were a couple of guys who came up to me on the day and said they would have entered the 50s but didn’t think there would be anyone in it, hopefully the age group categories can just keep growing.

I also have to mention that there were 3 guys who played 2 grades in the day. Leckie Dow, Ernest Radford. I was exhausted just playing the one so well done guys, that is a lot of racketball. They definitely deserved their beer and BBQ.