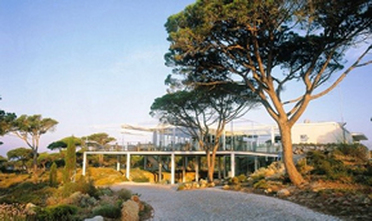 The  III Portugal Racketball Open was held on the 16th of February, in Cascais-Lisbon, at the beautiful Health & Racket Club Quinta da Marinha, for which there were about 30 athletes enrolled on three competitive draws: Under 45,  Over45 and Ladies.

This event was attended by the winner of last year edition - Matt Baker, followed  by the presence of another England Squash & Racketball Manager - Paul Fennel and a contingent of five athletes from Hallamshire Tennis and Squash Club.

Additionally, the Spanish #1 Pablo del Rio came along with two other players in clear progression in the  spanish ranking - Andres Muñoz and Sebastian Munar; amongst the portuguese we could find Manuel da Costa and Paulo Martins and a few more local players that are getting very keen on this sport!

In  Under 45 , Pablo del Rio and Matt Baker won all their rivals until they meet in the final where they presented the audience with a fantastic game in which Pablo de Rio managed to "revenge" his defeat in last year final, by defeating Matt Baker by 2-0 (13-11, 11-9). The 3rd place was awarded to the Spanish player Andres Muñoz who also beat another Englishman Matt Rushby by 2-0 (11-9, 11-5).

The best Portuguese classification in this draw was  Paulo Martins who beat his countryman Manuel da Costa by 2-1 (8-11, 11-9, 16-14) in an excellent match and fought until the last moment! 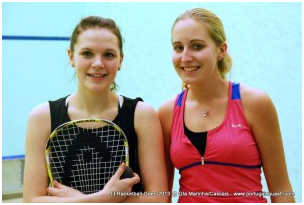 In  the Over 45 , Paul Fennel and Pedro Proença got rid of all their opponents without losing until the final, where the englishman defeated the local player  by 2-0 (11-6,11-8).


In the Ladies draw , Matilda Parslow won all their competition without losing any set, but needed get over Emma Stallworthy in the final where she won by 2-0 (11-4, 11-7). In 3rd place came the Portuguese Cristina Eira who gave excellent replica to the winner of this draw and made ​​a good tournament. In the remaining positions came  the rookies and Tatiana Arouca and Catarina Vendrell.

Closing this memorable event, there wasa dinner reception followed by a trophy award ceremony at  Hemingway Cascais in the  beautiful Cascais Marina, with the presence of most of the athletes, families and racketball supporters.

The organization would like to commend all the support provided by the Health & Racket Club Quinta da Marinha and the Citadel Hotel Cidadela that hosted some of the athletes and thank to the tournament sponsors:

Last but not least, we are pleased to announce that we are already preparing the fourth edition of the Portugal Racketball Open 2014 - more details briefly!