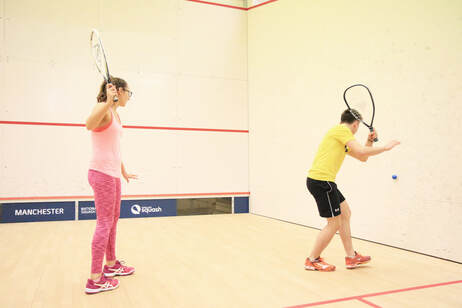 ​Sonia White reports on a Racketball journey, which started at Stourbridge Lawn Tennis and Squash Club.

Racketball was introduced via beginners courses in the early 80's aimed specifically at non-working ladies.  Through that I joined in 1994 and there were 30 RB leagues of 5 for the daytime and just 12 for the evenings. There were West Midland Leagues Singles and Doubles matches even then, but being played in the evenings and competitively through the West Midlands Region.

The clubs all had their own internal leagues and the Racketball Association as the Governing Body at that time, invited clubs to enter two 2 or more teams into their inter club competitons/leagues.  “From memory The West Midland  Regional team consisted of Stourbridge, The Priory, Solihull, Nuneaton and others.   The Worcestershire Racketball Region consisted of mainly ladies teams from Malvern, Stourport, 5 teams, Stourbridge, 5 teams, Redditch, Bromsgrove, Barnt Green. The mens teams/leagues still operate as West Midlands Region Racketball.”

In 2004 Sonia White took over the regular twice-yearly RB Beginner courses open to all ages of all abilities to learn a game that could be played in all weathers.  Courses drew in a new range of players especially the over 40's men.  The introduction of ex squash men lifted the standard of RB.  At it's peak Stourbridge ran roughly 20 daytime leagues and 25 evening leagues. The total is currently around 39 internal leagues which is an amazing achievement. 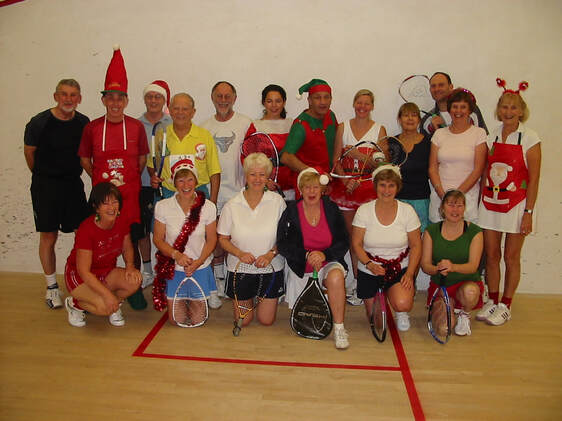 ​The West Midlands Leagues and Competitions became smaller and smaller as other clubs could not provide teams to compete against us.  Again the ladies wanted some inter club matches so they changed them to friendlies.  They are supposedly not competitive!!!

Nowadays, each participating club has a co-ordinator and at the start of the season they arrange the dates for the year, usually monthly.  Two weeks prior to the date courts are booked and posters put up for members to book a place.  We generally play doubles now as there are a lot of men involved so in order to make it more social we find that doubles works better.  I am sure that singles could work if that is what suits your members. For us we each play every couple so the games are first to 11, 15 or 21 according to participants. Pairings are out of a hat!  My husband plays so we would be split.  Usually stronger ladies are classed as men so this also encourages early learners.  Yes we are very friendly!

Each year we have a Christmas get together with fancy dress and as I said in my text the only payment required of players is for food.  We usually have four courts for two hours one morning, shower and eat.
THE BEGINNER COURSES
Posters are below

When I took them over my emphasis was to get new club members by introducing RB as a fun all weather sport.  I devised a programme to cover 5 weeks of one hour sessions covering all aspects of play in a constructive, fun way.  The courses offered free club membership and racket for the duration and beginners were encouraged to use that to practise their newly learned skills in a thrice weekly mix in session outside the course coaching.  On the last week we had a course competition on the show court at the end of which were free coffees with the Racketball Chair to get them to sign up there and then!  The success rate varied, but was usually a high take up.