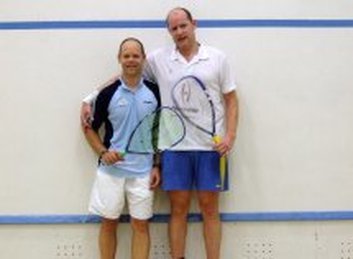 The Mens A competition was a strictly men only zone! Defending champion James Powley faced fellow club-mate Galen Le Cheminant, both of Hunts County Squash Club. Some fantastic racketball was displayed by both and although the rallies and games were close James could not quite overcome Galen’s game with Galen taking the final 3-0.

The juniors played a round robin and some excellent racketball was displayed. Chris Rej took the title with Jace Anderson finishing as Runner-up. The Ladies title was won by Andrea Alexander with Runner-up Sophie Rej.

The Mens B competition had been invaded by ladies including East Region Development Coaches Nicky Green (Norfolk) and Faye Kowalewsky (Cambs). The ladies did not disappoint, dominating the B draw and ensuring an all-girl final where Maxine Dove’s tight game was too much for Faye and she stormed to a 3-0win! 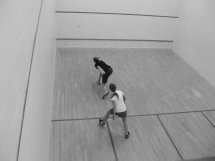 Faye & Maxine in Senior B play off 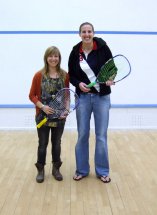 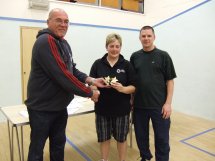 Another year, another successful tournament. Well done to organiser Byron Williams for en-suring the competition maintained a friendly and relaxed atmosphere which seems to draw the ‘regulars’ back year after year!