the straight drive from the front 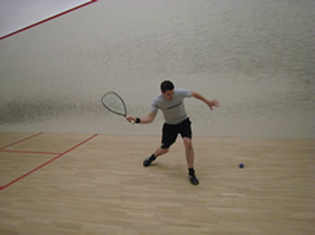 With the heavy and bouncy Racketball timing is crucial. You need to be in rhythm with the balls so that you're able to transfer your weight through the shot. In racket sports where the ball is lighter you are able to use the wrist to make up for a poor body position but this is not always the case in Racketball.

Try to play this shot with a very short swing, if you aim to punch the ball rather than swing through you can gain significantly more control, meaning you can avoid the side wall. If you take the ball low down and hit with cut (but not very much) this gives the ball a much better chance of dying in the back corners. As the ball has been hit with a punch rather than a swing it will still carry to the back, but has less chance of rebounding off.

Big swings can often go wrong, with the ball either flying back towards you or clattering into the side wall, and because the ball is so bouncy you are liable to give away easy strokes. Even if you hit the ball well with a large swing its difficult to hit a winner as the ball will often be over hit and rebound off the back. 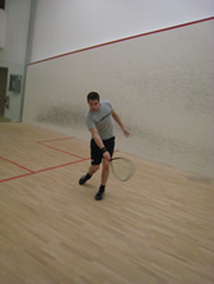 Try to hit this shot with 80% of your total power. Use a smaller back swing, hold the racket behind your head rather than above your head. You still follow through the same way (try to get your racket to aim at the corner) this is essential to get the ball to the back and still have control. I found that even with the small modifications of where you hold the racket and you attitude to the shot (how hard you want to hit it) this can make a make a big difference to your control of the shot.

When the top guys hit the ball you should be able to see the difference between the punch and the swing. They will usually use the swing when the ball comes off the back wall or is really loose in the middle. The punch is for when the ball is tighter and they are looking to move it around and gain position. Try experimenting, you will soon realise that hitting the ball as hard as you can is often counterproductive.

The best example of a player who often looks to punch the ball is Peter Nicol, click on the link below to watch the National Racketball final where he plays Daryl Selby to see what I mean. Its amazing how much pressure Nicol can put an opponent under without ever raising the pace of his shots. 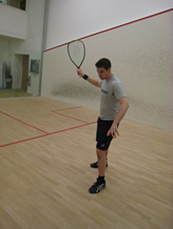 The racket starts above my head but not as high as it would if I was attempting a full blown drive with maximum power.

Make sure that your hips and shoulders are facing the side wall with your elbow slightly bent. The elbow needs to be ready to straighten on impact, this is important so as to generate maximum pace on the ball even with the shorter swing.

It is important to note that with a smaller swing I can also be more deceptive, I can easily turn this shot into a drop or cross court kill. 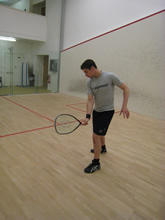 From the small swing you still need to generate fast racket head speed straightening the elbow at the last minute is a useful tip in helping with this.

With a short punchy swing, power is all down to timing. You will need to swing, move into the ball (transfer body weight), and snap with your elbow and wrist all at the same time.

Make sure that you take the ball in front of your body for maximum body weight transfer. 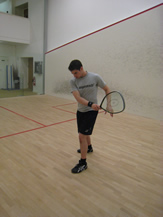 After impact hold your position on the ball and try not to pull up to early.

Aim to let the racket end up roughly pointing to the corner, any less than this and you might not get the best power anymore and you might lose control.

​A good follow through is essential to make the ball go where you want it to.

The video below is from the the 2010 National Racketball final between Peter Nicol and Daryl Selby. This video contains some great examples of the chip drive from the front. Both players move the ball around expertly and only rarely look to hit with maximum power.
© 2020 UK Racketball . All Rights Reserved﻿