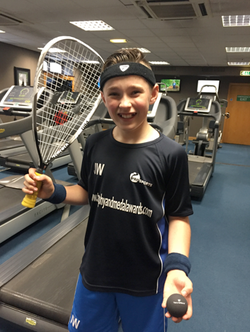 ​This year’s event was hosted, for the first time, at the Liverpool Cricket Club on Saturday 16th July. With entrants coming from across the Country, it was a fantastic day of racketball with some very exciting and hard fought games. Following the usual one-day format, all matches were best of 3 games with all players getting at least 3 matches.

The girls’ event saw the age groups combined to ensure all competitors got enough matches. This did not mean however that there were any easy games. At the end of the round robin, it was Jasmine Tranter (Oxfordshire) who proved too strong and secured two titles defeating Libby Walton (Merseyside) in the U13 final and Libby Hull (Lancashire) in the U15 final.

The boys’ events got off to a cracking start with Sam Booth (Lincolnshire) and Harry Kitchens (Essex) battling it out all the way in the U17’s, Harry eventually sneaking it 11-9 in the final game. This proved to be the tail of the U17 event with a number of games going to a tie break, and the final being the closest match of all. The battle of the giants saw Nathaniel Fairhurst (Merseyside) defeat Marcus Tranter (Oxfordshire) 2-1 to take the title. Both boys gave it their all, playing some long and brutal rallies it was a matter of who would make the fewest mistakes. Nathaniel just held on in the third game winning it 11-9, despite a valiant fight back by Marcus from 8-2 down.
​
Jack Whitfield, Cory Harding and James Walton, all from Merseyside, definitely had the toughest day though. Not only did they play each other for the U13 title but they also all competed in the U15s event. The U13 title could have been won by anyone, with every match going all the way. It was Jack Whitfield who came out on top though, after defeating James Walton 17/15 12/14 11/7 he went onto beat Cory Harding 11/8 9/11 11/4 in the final.
​
In the boys’ U15, Simon Herbert (Leicestershire) had too much fire power for his opponents. Coming through a tough opening match against Joseph Walton (Merseyside), he was able to absorb Joseph’s power game and take the match 2-1. In the final, he came across Lewis Harding (Merseyside) with both players playing a similar style. With lots of variation of pace, the boys moved each other from corner to corner. Simon proved to be the most patient again however and took the title 11/4 12-10 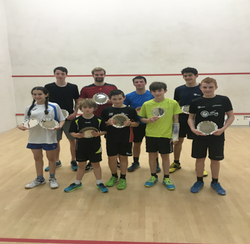 The final match of the tournament saw Hamish Falconer (Lincolnshire) take on Matty Powell (Merseyside) in the Men’s U23. After a strong showing at the Senior Racketball Nationals by Hamish the previous week, it would need something special from Matty to take the title. Despite trying his best to move Hamish around court and play some winners, Matty just couldn’t break his opponent down. Hamish was too strong and consistent on the day, forcing Matty into too many mistakes and taking the title 2-0.
​
Thanks must go to Lee Walton for all the time and effort he put in to get the tournament organised with such short notice. Thanks to Tecnifibre for sponsoring the event and Liverpool Cricket Club for provided such a wonderful venue.
We will get the dates out for next year ASAP, hopefully see you all there.