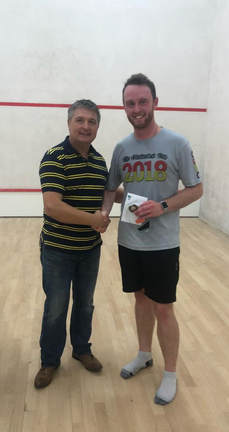 Head to our Facebook page for all the photos - www.facebook.com/UKRacketballSeries/

The Surrey S57/Racketball Closed tournament once again returned to Surbiton Racket & Fitness Club with an increased entry on last year to 27 players.
As well the Men’s A Grade, Over 45’s and Over 55’s events we saw the inclusion of a Men’s B event too. All events except the B’s were a Monrad style played best of 3 PAR scoring to 11.

Men’s A Grade
Missing from the line-up was the current Champion Mike Robinson but there was still a very strong field of players mainly from the host club. The opening matches saw the higher ranked players ease through, but it set up some interesting matches which would determine who would make it to the final. The first match saw an all Surbiton affair with Peter Higgins playing Richard North to which the left-handed Peter just had too much winning 2-1. The other court had Dave Smith of David Lloyd Purley take on Surbiton’s Ed Tinwell. The match saw some gruelling rallies and could have gone either way, but Ed was a 2-1 victor.
This set up a final between Ed and Peter who had not played each other before. Peter produced an array of unorthodox shots which entertained the crowd no end, but Ed was playing some tantalising racketball securing the opening game. Peter drew level in the second which led to a 3rd and final game which it seemed no-one could close out. Eventually Peter got their winning 14-12.
Men’s B

​This category was open to any player that does not compete in the competitive Surrey S57 Division. A late withdrawal meant that some players would be restricted to just two matches instead of three. Whilst the rallies may not have been as long as those being witnessed in the A grade matches, it was still very competitive but better still was the fantastic spirit that the players played with. This is testament to how the matches are played in the Surrey League Social Divisions. The matches soon saw the stronger players come through their opening matches and left us with a final between Surbiton’s Bill Parton and Andrew Borland of Woking.  Despite playing an extra game Bill still had enough left in the tank to take victory against Andrew 2-0. 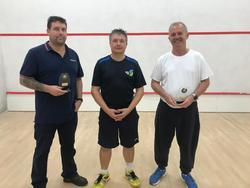 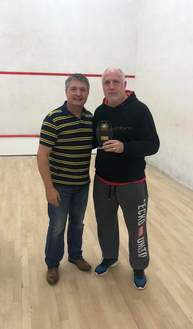 There were only 4 players in this event so a round Robin was played. Last year’s finalists Phil Hall and Mike Wardle were both competing and strongly fancied to be the two to beat. The schedule also meant that their last match could be a potential final unless there were any hiccups on the way. There was no such problem and they again met in what has now become known in football terms a heated derby. Both from Woking Squash Club there was clearly lots on the line to see who would hold their head up as the better player.

​In looking for someone to mark the match it became apparent that this was always going to be a challenge and so it was tournament organiser Rob Lelliott who officiated. The early points were contested extremely hard with each player trying to lay down their mark. Phil managed to build a small lead and closed out the opening game.  The second game was even tougher with as neither player clearly wanted to lose. However, the slightly younger Phil Hall secured the second game and was a 2-0 victor. Watch out the 55’s as Mike will be legible to play in that event next year!! 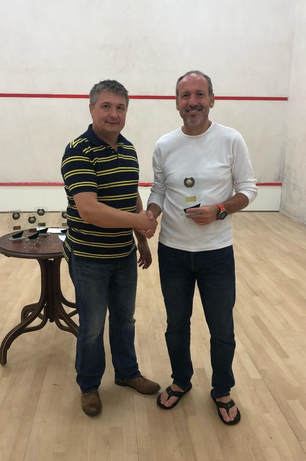 The Over 55’s had the inclusion of Sue Gotham from Surrey Sports Park who was not quite 55 but was accepted to play in the event as no other lady entered the tournament.

There were clearly four stronger players who all won their opening rounds setting up a strong semi-final line up. Malcolm North the reigning Over 55 champion played John Bainbridge (both Surbiton) and Roger Monteil (Surbiton) played Simon Dillon (SSP).  Both were epic matches going the full distance. The fitness of these guys is incredible as they pushed themselves to their limits. Eventually both Malcolm and Simon won each of their games 2-1 setting themselves up for the final.

The semi-final battle with Roger took more out of Simon who was unable to push Malcolm as hard and Malcolm regained his crown winning 2-0.

​Thanks go to Surbiton Racket & Fitness Club for once again hosting the event. For the first time the A Grade winner and runner up received prize money. The event much like the sport in Surrey is continuing to grow and with a number of regular A grade players unfortunately away for this years’ event, next year is already building to be bigger again and likely to be run over 2 days. 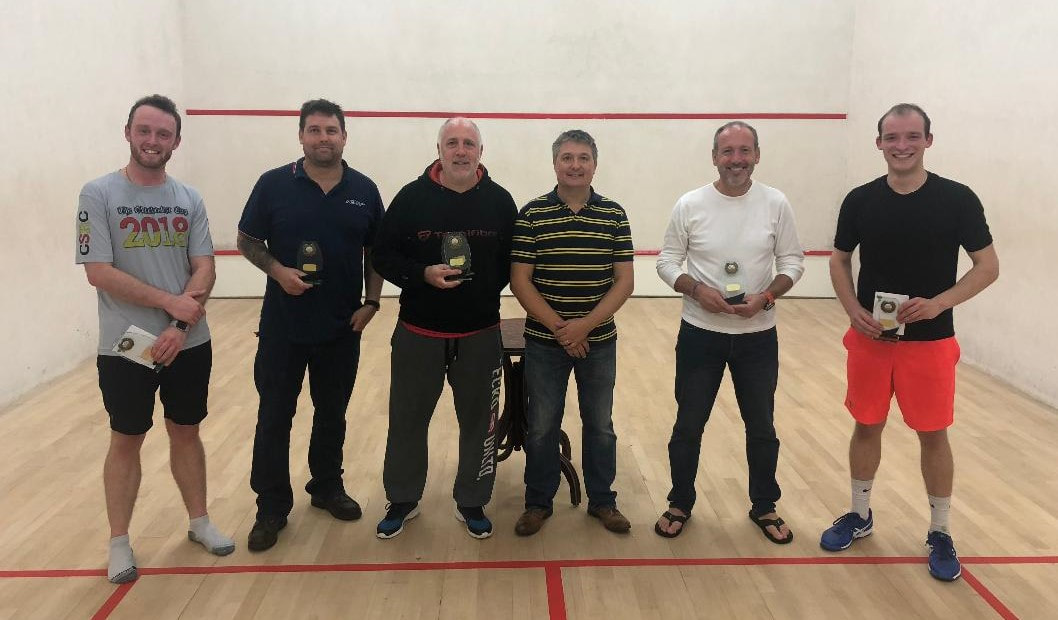