what advantages does a strong racketball section bring to your club

As Racketball/Squash57 uses squash courts these points do not look at why the game itself is great but specifically at why squash clubs should look to develop this section and how it can help the club as a whole. 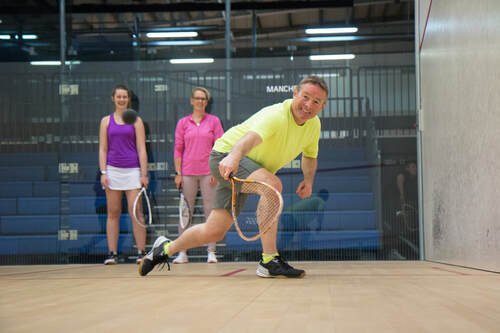 The old squash stereotype that the game is dominated by middle and upper class men playing is gradually fading with more juniors coming through but more needs to be done. Racketball is a great game for all ages and abilities. When the sport is strong in a club you see a lot more women playing and older age groups.


Racketball as an entry sport. Attract a new type of member!

Squash is a brutal game. Forbes magazine describes squash as the healthiest sport on a scale that looked at cardio endurance, strength, muscle endurance, flexibility, calories rating and injury risk. This is a great selling point for squash but it's important to remember that this will not appeal to everybody. If you do not consider yourself sporty this description of what awaits you on court could be quite daunting.

Racketball/Squash57 could not be closer to it's sister sport. The games technique and tactics are so similar, the major difference is that the game is played with a much bigger bouncier ball. This changes the game by making it easier to see and hit the ball and gives you longer to retrieve your opponents shots. At beginner level this is the easiest of all of the racket sports to pick up it is also great to begin to condition your body into sport.

Racketball is described as a game that is easy to learn but difficult to master.

If you do not think of yourself as naturally sporty Racketball could be the perfect sport for you! 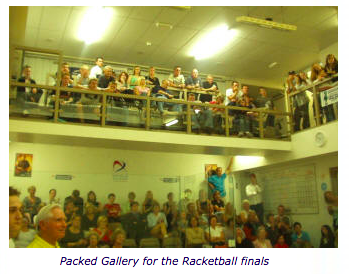 ​Competitions where all ages and abilities can compete together

Unlike many sports which tend to split there competitors across different tournaments (squash for example has its own masters tour) Racketball has always kept its age groups together. A great example of this happening in a major event is the Racketball Nationals in Edgbaston in 2019, the youngest player to compete was 10 years old and the oldest 84.

At a club level however this also works incredibly well. The Hallamshire Racketball summer league is a fantastic example. This handicap competition sees players of all ages and abilities come together and compete annually in the biggest club based Racketball tournament of the UK with over 200 players competing throughout the summer. For more information follow this link to our Hallamshire Club Case study page.

Bringing players of all ages and abilities is amazing for club spirit and atmosphere. Families can play together even if they are of very different ages, children and grandparents in the same team. Friends of vastly different standards can play together, people are much more likely to enjoy their time if it is with close friends. Here you can play in the same team regardless of their ability. Very few sports manage this. 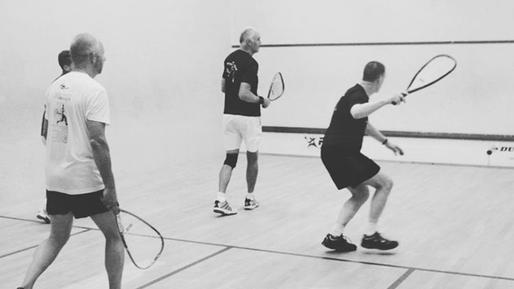 I have played squash professionally for 10 years and run the UK's biggest squash doubles tournament at Nottingham Squash Club every February which attracts 200 players a year and is an absolutely fantastic day. Squash doubles in my opinion is nowhere near as good a game as Racketball Doubles. Unfortunately we do not have any data available but I feel that most people will agree that if you went to a tennis club there would be a similar number of bookings for doubles as singles whereas this is just not the case with squash. The weakness of the squash doubles game is a real problem for squash clubs generally as they miss out on the social side that doubles can create in tennis and badminton clubs. Four people getting together makes for a very different atmosphere than two.

As the Racketball bounces higher and travels slower than the squash ball Racketball doubles has a rule that is used by only one other racket sport, Table Tennis. Racketball players as in Table Tennis have to hit alternate shots which makes for a brilliant game. In Racketball however players occupy the same space making this a completely unique game in the sporting world.

Alternate shots makes for a true game of doubles. In games where either member of the pair can strike the ball teams tend to end up with a dominant player as can become the case in squash or a situation where the weaker player is being targeted such as in Tennis or Badminton. In Racketball players will hit the ball an equal number of times over the course of the match.


The dynamics of alternate shots are really interesting, especially in a sport that is primarily a defensive game like Racketball. Does the better player try to hit winners to rack up the points or hit defensively to try and protect his partner from poor positions that could be created by attacking shots that go wrong. 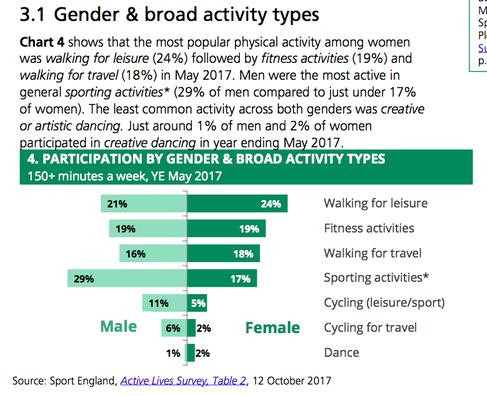 ​Figures specifically for Racketball do not exist but if you analyse squash club membership the clubs that have embraced Racketball have a much more balanced membership with respect to gender.

The nature of the game works well for players of both genders. It is a fantastic introductory game for people who do not normally engage in sport requiring less dynamic movement or hand eye coordination as many sports. Being a game that is easy to play but difficult to master makes it a great sport to encourage more female players.

Having more female members of your sport and community is not only a good thing for equality in sport but can have a knock on effect on all members at your club. More families and junior members are likely to join. Have a look at our club case studies for more information on how Racketball clubs have deliberately targeted female members through female only sessions and how this has in many cases been amazingly successful
​ 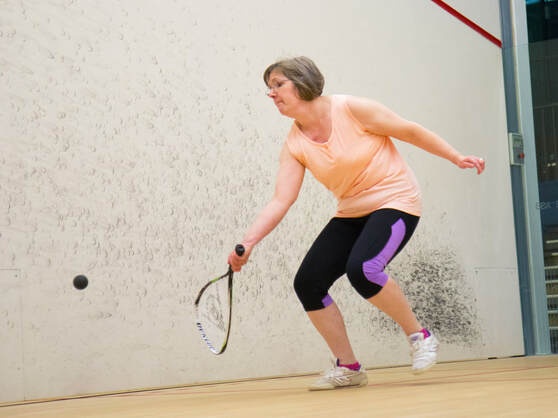 Racketball and as exit sport for squash

The characteristics of Racketball make it a perfect exit sport to squash. A bouncier ball that travels slower through the air gives players longer to get to the ball making it less dynamic. Racketball reduces many movements that many people become less confident in as they get older like large lunges or fast changes in direction.

​Many clubs have found that introducing Racketball has lead to players being able to carry on for longer, at the UK-Racketball the most popular categories are the over 50's and over 60's. In 2020 for the first time we have introduced an over 70's category and at the Nationals even had an over 80's running for the first time.

With a big bouncy ball Racketball is a great game to introduce juniors to any racket sport and build up their hand eye coordination from a very early age. In some cases squash coaches have run Racketball rather than squash sessions for their youngest participants. At one point in Sheffield John Mullins ran a Sunday morning Racketball junior session with a huge weekly attendance of of around 100 juniors. 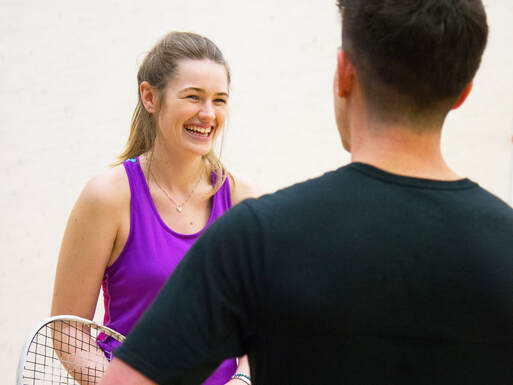 ​Some Racketball sessions can work very well at times that are traditionally quiet for squash clubs. If you have a look at our case studies you will see that coaches have developed ladies only Racketball during the day as well as sessions for players who have retired. This means that clubs are able to run sessions during the day at a time that normally sees very little court usage at UK clubs.

Attracting more members and a different type of member can have a very positive effect on clubs court usage and income. It is important to remember that more members improves club finances through several different revenue streams. Membership fees, court bookings, shop income, bar income as well as sponsorship. More members can also naturally further increase membership. People talk and will tell there friends about the club, if they are enjoying there sport don't underestimate the impact word of mouth will have on membership. A more diverse and growing membership can also have a positive impact on the clubs atmosphere, the more fun that members have the more likely they're to mention the club to friends and family. It is amazing what can happen once you have positive spirals working in your favour.