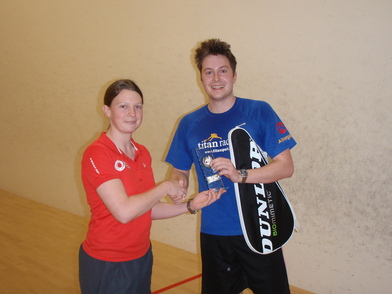 8 Over 50’s played some great racketball, with 4 of them progressing in the Main Competition and 4 playing in the Plate Competition from round one. In the Plate Semi Finals Competition Wayne Burns and Greg Watts played a close match to decide who would go through to the Plate Final. Burns finally took the match 3/2 (11-8, 4-11, 11-8, 8-11, 11-6), he then met Neville Glaister in the Final on the Sunday. Another close match followed for Burns in the Final, but determined to win, Burns beat Glaister 3/0 (11-8, 12-10, 11-9).

In the Main Competition of the Over 50’s, Gerry Burr and Geoff Collins met in the Final after beating their opponents Graeme Slocombe and Alan Walker respectively in the Semi-Finals. Collins played well and made it difficult for Burr to win 3/0 (12-10, 11-6, 11/7).

In Grade C a few complete beginners entered, it was great to see their enthusiasm for the game and their eagerness to play. With 6 entries, the grade was split into 2 groups, with the winner of each group battling it out for overall winner. In Group A, Will White sailed through to the Final, winning both of his matches 3/0 against Jake Macklin and Russell Ford.

Although Chris Gunn put up a good fight against Anthony Clark, forcing two games to 12-10, 12-10 Clark was the stronger player taking the third game 11-7. With Clark winning both of his matches 3/0 against Gunn and Rebecca Munro, Clark went through to Sunday’s Final. Sunday was a similar story for Will White, as again he sailed through the Final, beating Group B’s winner Anthony Clark 11-5, 11-6, 11-8.

In Grade A there was some fantastic racketball being played throughout the weekend, in particular the final match. With a crowded balcony, and many players who were knocked out on Saturday returning to Thame to watch, Paul Johnson took on the favourite, Tom Phipps in the deciding match to see who would be crowned South Regional Racketball Champion.

It was a fantastic weekend, full of exciting racketball matches and some close games. Well done to all who entered and congratulations to all the winners!