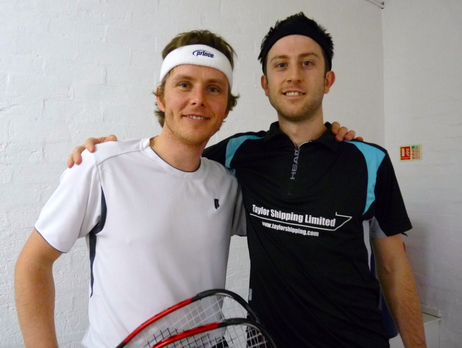 For full results and report follow this link to SquashSite ​

…. And this was the big one. Squash Legend Peter Nicol was Daryl’s latest victim in The National Championships at Edgbaston Priory at the weekend. Meanwhile Laura Hill cruised to her fifth Women’s crown and Jim Lord repeated last year’s remarkable feat – 2 age groups wins.

​MEN’S OPEN
Daryl Selby has won his National title, and this time his scalp in the final was the legendary ex-World Squash Champion Peter Nicol.
FINAL
The finals were watched by a capacity crowd of 250, probably the largest yet to watch a racketball match, and they were in for a treat.
Selby got off to a flier, winning the first game 11-4, after some gruelling rallies but Nicol showed all the resolve expected from a man who spent 5 years as the World’s number one He took an early lead in the second, and ground out a 12-10 win, Selby’s only dropped game of the competition. Selby came back strongly in the third to take it 11-7.
Visibly weakened by the earlier Campion match, Nicol put everything into the fourth, but whatever he tried, Selby had the answer, and although the game produced some spectacular rallies, Selby always looked the more likely winner, and he finally took it 11-9, with Nicol tinning after saving 2 match balls.