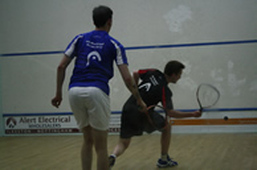 Group A
Ted Jeal 2 -0 Paul Norton
"Quite comfortable, I through quite a few tricks shots - he had a bad back so I made him run around a bit." Ted
Paul Norton played well in his other fixtures against Nick Bond and Joseph Cybaniak defeating both 2-0.
Group B
Tom Phipps 2- 1 Curtis Tomlinson

Curtis - "He played really well, as did I seeing as both of us haven't played much this. We played in intercounties and he played muc better. Gave him an 8 point lead, pulled it back to 10-8 but just couldn't finish it whilst he hit a few good nicks to win it." Curtis

"It was tiring! He played v well in the first, I amanged to win the second quite comfortably. I went 8-2 up, he managed to pull it back to 10-8 and I managed to scrape it 12-10 in the third so I was very lucky!" Tom

This was a tough group and produced some of the most brutal battles of the day. In the end it could have gone either way between Tomlinson, Phipps and Tolman but it was Phipp’s experience that saw him through defeating Tolman 2-0 and Tomlinson by just 2 points in the decider. 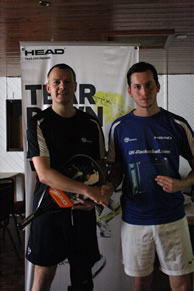 "It went quite well. Most my shots were coming off and heading into the nick which I think frustrated my opponent. I'm feeling quite fit at the moment as well so I think that helped. Tom's a good touch player at the front and retrieves everything back, but it just went my way this time, especially with my drops."Ted

Another title for Ted Jeal to add to the collection! 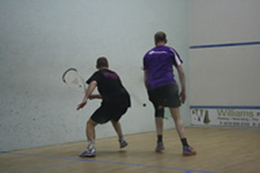 "It was a steady game, he was tentative to begin with and I got a good start which boosted my confidence enough to push through and win it in 2." Ian

"He was hitting the ball quite hard back at me and I was using my power to counter that. It seemed to work as I won 2-0." Ian 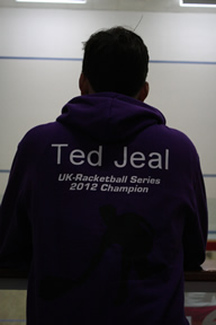 Group B
The group came down to between local man Neil Tatham and Billy Jones. Both bested the other players in the group, Terri Mottram and Anthony Williams. In the show down it was Jones that emerged victorious defeating Tatham 2-1.

"16-14 in the third - he just wouldn't give up! It was even-stevens all the way, long rallies, all the games were really close. It went down to the wire, I think I just had the right shot at the right time." Mike

"The rallies were long but I felt like I played well but Bob was just getting to everything and made few mistakes himself. I really enjoyed the battle though!" Jo

In Group A Paul Devey topped the group with victories over both Stewart Lowth and Ben Marsters.

Gary Daubney faced off some stiff competition from Ian Collins in group B; however the fact that he didn’t drop a game against either Serge Mbikina, Liam Trusswell or Collins sent him through to the final.

Another match of note was between the old rivals Stewart Lowth and Liam Trusswell in the playoffs with Lowth coming through this encounter 2-0.

Final
Paul Devery came out on top in the final dispatching local player Gary Daubney 2 – 0 in the final.

Group A
It was brutal match between England no.1 James Powley and Andy Murray but Powley looked a bit more mobile on the day and came through to claim the group and a place in the final.

"I just snuck it, but it was nice to play a lady. Only just getting used to the black ball, it comes off quite quickly but I really enjoyed it" Mike

"I don't think she's been playing that long and it's tough for tournaments to accommodate smaller numbers of women, but we enjoyed the game!" Marc

"Fast and phrenetic! He was much fitter than I was and I got lucky with a few nicks” Marc

"I don't think he liked playing that early in the morning! I had to get up so early this morning to eat before my game! My longer reach did me well and I think it frustrated. I think the draw was kind to me today!" Marc

"I hit him with the ball, I stood on his foot. I was really pleased that I won. It was the first time I've beaten James in a competitive match.  It was a bruising, ill-tempered affair. It was a really tight game, I took the chances I was given."Marc 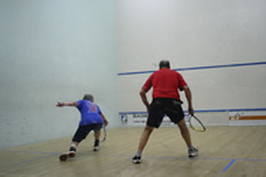 "James steady player loves to vary the pace and it was just too much for Greg in the end."Gabriel Uttley, spectator

"It was a good game with lots of good rallies, in the end I think I was just a bit more consistent." Janak

"He was just a bit too strong for Paul, he put it away well. But paul is a newcomer to the over 50's and is a good addition to the category - he really raises the standard!" Gabriel Uttley, spectator


Group B
After the withdrawal of The Manor legend Nigel Millington through injury group B was left to be contested between Malc Bramley and Nick Tobin. Bramley was the higher seed and proved it on the day with a 2 -0 victory over Tobin to take him into the semi.


Group C
It was a best of 5 between two Uk-Racketball Series favourites Michael English and Stephen Uttley. It was a good match but in the end English came through 3 -0 but I am sure that Uttley’s tenacity was a contributing factor to English’s eventual defeat in the Semi.

"Nigel is a left hander and hits the ball really well, I tried to play him on the back-hand and in the end it worked and I won 2-0."  Gabrie

"Mike sarted off very slowly, played some lovely lenths and didn't give malc time to settle. A really tight first game. Mike started strongly in the second and got to 5-2 up but seemed to hit the wall. Malc got 8 points in a row to level it. In the third, mike went 4-3 up and hit the wall again. Malc had much better width and there wasn't much mike could do about it. Very entertaining game!"Gabriel, spectator

In the other semi final Janak Malkaini had to much for Paul Fennal coming through 2 – 0. 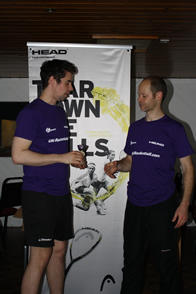 "Malc tried his best but a hard semi with mike tired him out, and Janak's boasts were the final straw. He found it difficult to put Janak under pressure and with Janak stepping it up a gear, he couldn't quite compete. Malc has risen through the rankings pretty quickly though, so there's the possibility that this time year he could really compete. Janak is so tenacious and that can be difficult to play. Today, he just didn't give Malc the time to settle." Gabriel, spectator

﻿Group Stages﻿
Ian Graham came through group A without dropping a game despite being pushed hard by the dogmatic Graham Greensall.

Group B was won by David Manning with Roy Burns coming in a close second defeating both Ron Lathbury and Roger Kenyon.

"Both very strong players. They played a very controlled game, it was really cat and mouse. Dave won the first comfortably and then Ian got it back and was patient. Dave stepped it up a gear in the third, had immaculate width and his patience paid off!" Gabriel

Winner
"It was tight, competitive and fair. My opponent gave me a stroke at match ball, when ref was going to give a let ball, it shows the fairness. It was a good game, I really enjoyed it." David 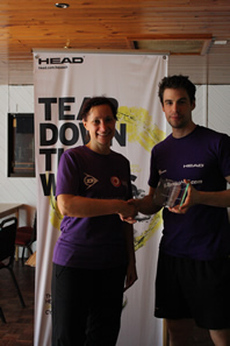 "Good first game, it was close. I think the second game was a bit easier than the first. I've not played Elaine before so I wasn't sure what to expect, but she was a good steady player." Jo

"Terri fought hard and she has potential to be a great player.  It was my first UK-Racketball event and I'm glad it went so well. I'm really looking forward to playing the rest of the Series!" Jo

With two victories out of two Jo Shelley emerged victorious of the women’s category with Terri Mottram coming in second. 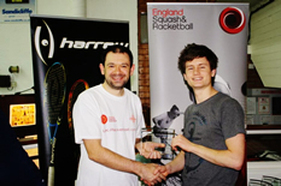 For the third year in a row, The Manor Racketball Open will open the UK-Racketball Series. If this year's entries are anything like those of 2011 and 2012, the Series will take over all five of the Manor's courts for the day - UK-Racketball is well and truly in town! 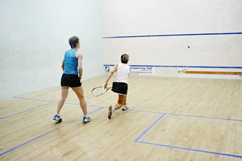 The Manor has plenty of onsite parking available, a great gym where players will be able to warm up and a sauna for after your match.
The club has three glass back courts and two hard back courts and if entries match the level that they have been at for the past couple of years we will take over the club for the day.
There are plenty of seats for spectators to watch on the show court and a nice area to sit and watch the other glass backs.
The club has a large bar which is perfect for competitors to rest and recover away from the racketball. Hot and cold food will be available throughout the day from reception and the bar. Over the past 2 seasons the food has been readily available and very reasonably priced.

The club is easily accessible just off the M1.
Manor Road,
Ilkeston,
Derbyshire,
DE7 8AT 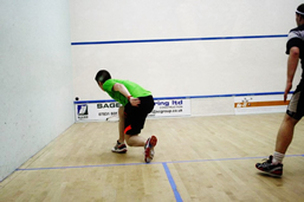 Back in 2011, the Manor Racketball Open broke the record for the highest number of entries into any UK-Racketball Series event with almost 70 competitors on the day. The Manor was also the first event to run beginners and ladies categories; an addition that are now extremely popular throughout the rest of the Series.  In 2011 they were won by John Brierley and Matilda Parslow respectively.

In 2012 the event again saw a great entry, which saw even more competitors head to the club than the previous year. The final was hottly anticipated, with the 2011 Series Champion Tom Phipps taking on local hero and then head coach Pete Goodings. In the end Phipps proved more resilient but it was a fantastic end to a great tournament.