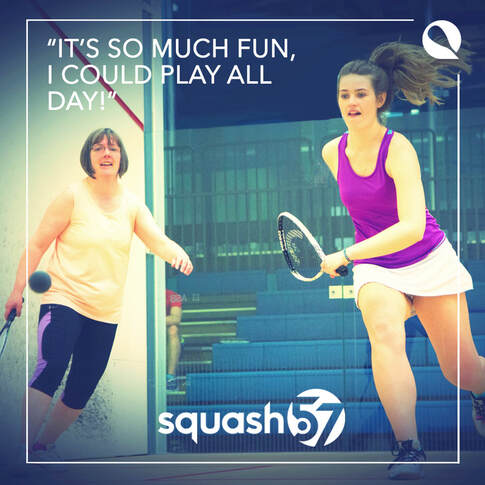 England Squash in conjunction with UK-Racketball are running a Squash57/Racketball development program that is designed to help to get beginners club sessions off the ground.

"We are very excited about this project, it is based on a promotion that we ran for a junior program at Leicester Squash Club between 2014 and 2017. During this period we tripled the number of juniors attending a Saturday morning session from 15 to 45" I am sure that this will also work equally well for Racketball.

We have limited resources that we can use to help clubs. If you would like to apply email Mark Fuller directly and he will come back to you on how to do this mark@starsportsdevelopment.com

Buddy Bags - if you bring a friend to squash then you receive a free buddy bag. These contained grips, balls, wristbands and a  water bottle. The bags themselves are England Squash draw sting bags that are perfect to look after your kit.

First Session is Free and Free Racket after Five Sessions - the first session that you attend is free making the barrier to entry for the first session very low. If you attend five sessions then you receive a free racket. We feel that this would mean that players committed for a longer period of time to the program. Hopefully as well once they have their racket they're very much more likely to come back the next week!

​
To make an enquiry to see if you are able to access this funding please contact Mark Fuller directly mark@starsportsdevelopment.com
​

In September, England Squash announced a collaborative new partnership with UK-Racketball that will see the two organisations work in unison to grow the game at all levels.

In the last eight years, UK-Racketball have developed a first-rate series of events and have played a leading role in driving the game forward in recent years in England, having staged 65 events, open to players of all ages and abilities.

The new partnership will build on this momentum in a number of ways through the delivery of coaching courses and participation programmes to increase the number of people playing recreationally and competitively. In the coming months, England Squash and UK Racketball will develop a number of Squash 57 resources to support clubs and coaches looking to develop Squash 57 activities including downloadable imagery and posters, promo videos, session ideas and how-to guides.

Mark Fuller who has been running UK-Racketball since 2010 is optimistic about the future of the game:
"This partnership will help us to market our events to players and enable UK-Racketball to become involved in building the grassroots participation of the sport as we look to deliver beginner taster sessions at clubs, specific racketball / Squash57 coaching courses and better organisation of the sport. 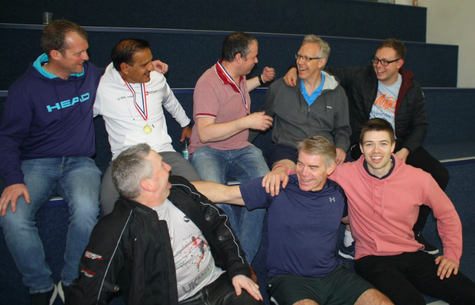 “The sport has a bright future as we look to engage more players both recreationally and competitively than ever and raise the profile of the sport.”

Squash clubs who’ve embraced Squash 57 to engage new audiences are reaping the rewards. Woking Squash Club in Surrey has seen a huge uptake in female members after running a series of introductory Squash 57 sessions aimed specifically at women. Jackie Thorogood, one of the coaches behind the initiative explains how the club introduced prospective members to

Squash 57 because of its suitability to beginners and focusing on fun and sociability rather than on technique:

“Squash 57 has a bigger, bouncier ball, so you can have a bit more of a rally, which we thought was a great option for newer players to sustain their interest.”

​A year ago, the club had just six women among its membership. Now there are 35 women among their 270 members.
© 2020 UK Racketball . All Rights Reserved﻿