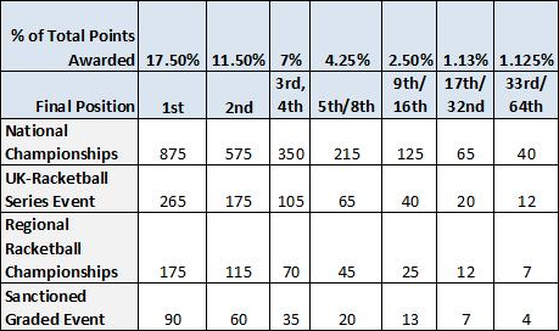 Ranking points are calculated based on the size of the event and your finishing position. Your average points over a 12 month period are used to create the rankings.

There are 4 event categories that are sanctioned by England Squash and Racketball all of which count towards your national racketball ranking.For every ESR sanctioned racketball event you can earn points towards your national ranking.
Please note that in the National Championships if you played in a category that does not have a National Rankings i.e. the Over 55's then this will count in the Over 50's but for half points.

After 12 months, from the date that a tournament finishes, all the scores from that event will be wiped from the ranking lists.

For example if you played an event in July 2010 these points will stay on until the 1st of August 2011.

Weighting of points for tournament type and finishing position


​Opting out from claiming points

It is possible to opt to not claim your points for an event if you decide that they might harm your average.

An example of why someone might want to do this is if they had an average of over 200 (i.e. top 10 in England) but wanted to play in a local graded event. If the player had to claim his points his average would drop even if he won the event.

If you wish to not claim your points for an event you must send an email to info@uk-racketball.com before the draws for that event are published.

The UK-Racketball Series Rankings are calculated as an increasing accumulation that resets at the start of each year.  For information on how to earn points and the prizes on offer at the end of the year follow the link to the individual series year. The end of year prize presentation will take place at the end of the final event of the year, usually in November or December. 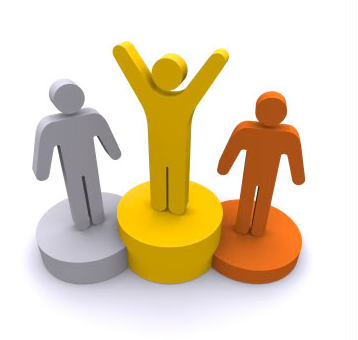