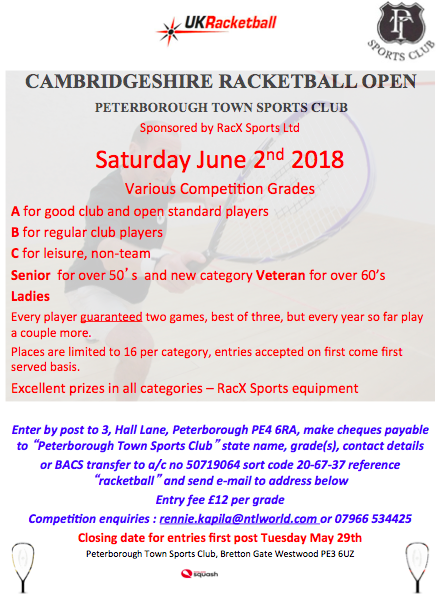 ​​This is a call for entries to this year’s Cambridgeshire Racketball Open. As players in last year’s competition or local racketball players I am writing to you in the first instance to announce the date of the event and invite you to enter. I hope you have all had a successful sporting year since last year’s event and you are fit and well to enjoy a long-awaited summer.

The format for the competition will be pretty familiar with group stages to begin to ensure everyone gets a few matches, moving to a knockout stage for the top guys in each group.

This year I have introduced an over 60’s category (as I am now 60 I might even play).

Please find attached an entry form in Word that you can complete and email or post back to me. This is the first year after six years of the event that the entry fee has rise (to £12 per event). I always guarantee at least two matches, best of three, but every year of the event so far every player has had three matches minimum.

I have also attached the Roll of Honour of previous winners and a poster, which I would ask you to print off and put up on your local club’s notice board and even distribute as an email attachment to guys you know who could be interested in playing or forward to your local club secretary to send to the club membership.

I hope to hear from you by return and look forward to another fun but competitive event. As I have always said the intent is to send you home knackered and smiling.