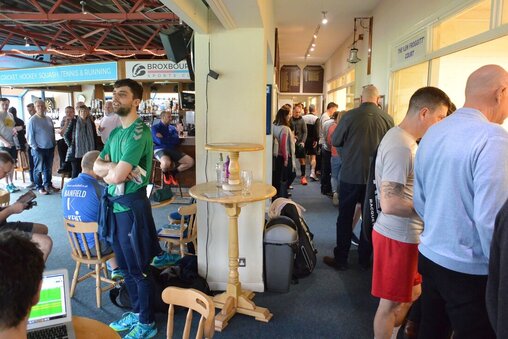 The return of the UK-Racketball Series in 2023 begins once again at Broxbourne for the East of England Racketball Open!

The Broxbourne tournament ​was new to the Series in 2018 and has proved very popular ever since with the event in 2019 selling out early. In February 2020, the East of England Open became the first and last event of the year, as the series came to a premature end. We came back with a bang in 2022 with a very strong A Grade draw. This saw Luke Bishop take a marathon 2/1 win over local favourite Nick Mulvey to retain his title at the club.

Paul Cousins took out the fast improving Oliver Staunton in the B Grade, with local legend Adam Grilli just losing out to the relentless Ryan Loska in the O40s.
Jason Russel took the first of his 2022 series titles in the 50s, beating Roger Camp in the Final, and Nick Sims was the 60's Champion over Exeter's Graham Holmes.
Our first year of O70s age group events saw Series regular Graham Greensall beat Alec Livingstone in the final. Really great to have such a good O70's uptake! Finally, Luke Bishop & Amber Marshall took the Doubles title in an entertaining match against the retrieving skills of Loska and the ball skill of Paul Knocker Norton!

It is likely that Broxbourne will be popular again this year falling straight after the winter break and being the first of the 2023 series. If you are planning to play then you are advised not to leave it to the last minute. This is a lovely tournament and not one to miss out on!

Broxbourne Sports Club has a wide range of top class facilities centred in the county of Hertfordshire. Well maintained and warm courts with a cozy bar that overlooks two of the courts.  The glass back show court will once again be used for the event finals. Dan Fernandez, Patrick Osborn,  Adam Grilli, Mark Banfield, Amber Marshall and Marc Thornley are all local to Broxbourne and long standing players in the Series, feel free to ask them about the events. For online entries follow this link to the Broxbourne Tournament page on SportyHQ.

Follow this link to enter online - https://www.sportyhq.com/tournament/view/Event-1-East-of-England-Racketball-Open-11th-February-Broxbourne
​
We have created a user guide to walk you through the process and make it as easy as possible - follow this link to access online - ​https://www.uk-racketball.com/series-faqs.html

If you are unsure which category to enter please feel free to contact Mike directly on 07789 394617 or email us at info@uk-racketball.com and we will be happy to advise you. ​ 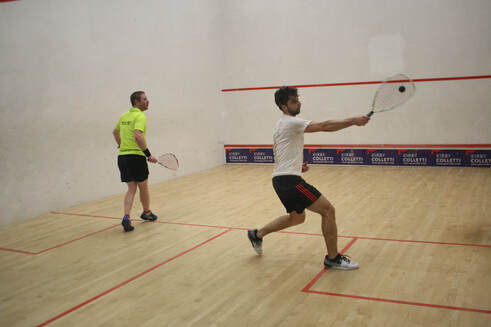 It was fantastic to be back in Broxbourne for the first event of the 2022 UK-Racketball Series. This was just the fourth time we've visited the East England club, and it's already proving to be a favourite venue among our series regulars. Entries for the East of England Open were among the strongest we've seen for a regional event, having sold out the week before the event.

The A Grade was perhaps the strongest we've had on UK Racketball outside of the British Open and National Championships. Group A was led by series favourite Luke Bishop, currently on 14 Titles and 5th on the All-Time Leaderboard. He maintained his run of form to win the group and set up yet another Series Final. Group B was a highly competitive affair, featuring Michael Robinson, Nick Mulvey, Amber Marshall, and Elliot Selby. In what was effectively a semi-final, Nick took on Elliot on Court 5 in front of a packed-out bar with a hugely entertaining match. Some brutal Racketball and long rallies saw Nick eventually take the victory, but it may have taken something out of his legs going into the final. He started off very strong against Luke, winning the first 11/6, only to get embroiled in a huge battle for the second which Luke eventually took 14/12, both players saving multiple game balls. The third was locked in at 5/5, before Nick started cramping at the end of an incredibly long day to see Luke pull away for title number 15.

The B Grade had some really good entries and was one of the most competitive we've had, with 4 groups leading into semis and the final. Jodey Watts justified his number 1 seeding by coming through Group 1 unscathed, while in Group 2 the unseeded Oliver Staunton dispatched both the 2 and 7 seeds to progress to the semis. It was a similar story in Groups 3 and 4, with the seeds falling in both as Paul Cousins and Stuart Reeve made it to the next round. Both Semi-Finals went the distance, as did the B Grade Final, where Paul beat Oliver to take the title. 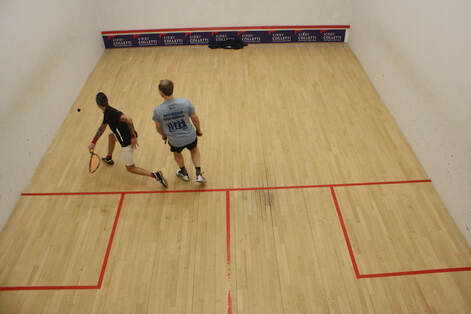 ​In the Over 40s, Number 1 seed Nick Jenkins took on local hero Adam Grilli in Group 1, with fifth-seed Adam getting the win and progressing to the final. In Group 2, Series Legend Paul Norton narrowly lost out to Ryan Loska, who joined Adam in the final. Ryan would go on to beat the home favourite Adam in the final, adding Title number 18 to his tally and sending him to Joint First on the all-time leaderboard alongside Patrick Osborn and Ted Jeal.

The Over 50's featured 3 groups of 4 going into a winner's group. All-time Series Leader Patrick Osborn headed up Group 1, although he was pushed all the way by David Acquet, 2 of their 3 games going to tie-breaks. In Group 2, Jason Russell saw off the 2, 5, and 7 seeds to win the group without dropping a game. Jason was the Over 40's Series Champion 10 years ago, and with a great physical effort and fantastic retrieving looked much the same player he was when he won that title. Group 3 was won by 3 seed Roger Camp, who also came through his matches in straight games. Jason took his dominant form into the finals group, winning by a comfortable margin, while Patrick and Roger had a real scrap for second place, Roger eventually winning 3/2.

Two big groups in the Over 60's meant 4 matches each before a final showdown. Group 1 saw 1 seed Graham Holmes come through unscathed, winning every match 2/0. Group 2 saw some fierce competition between the seeds, with Nick Sims eventually coming out on top. The final was a very high-quality affair between two highly experienced players. Graham Holmes doesn't lose many UK Racketball finals, but Nick started well and never looked back, outclassing Graham which doesn't happen often and taking the title. 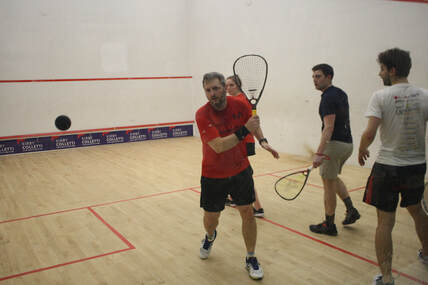 The Doubles was also one of the strongest we've had, selling out early and featuring a very high standard of pairs across both groups. Series favourites Luke Bishop and Amber Marshall once again teamed up, and were pushed all the way by the experienced pairing of Zoe Fennel and Patrick Osborn. Bishop/Marshall would eventually take the win and go on to the final. Group B also saw local players come through, scoring a couple of tight 2/1 wins over the seeded pairs to reach the final. In the final the experience of Luke and Amber, who've played and won together numerous times, really made the difference as they beat Elliot and Adam 11/8, 11/9.

It was a brilliant day at Broxbourne once again, a huge thank you to the club for hosting us for a fourth time. A big thank you to Luke from SportyHQ as well, who showed up on the day to watch a UK-Racketball Series event in person and help ensure everything went smoothly as we used the software for the first time at an event.

We hope to see you all next month at Hallamshire for the North-East of England Racketball Open. 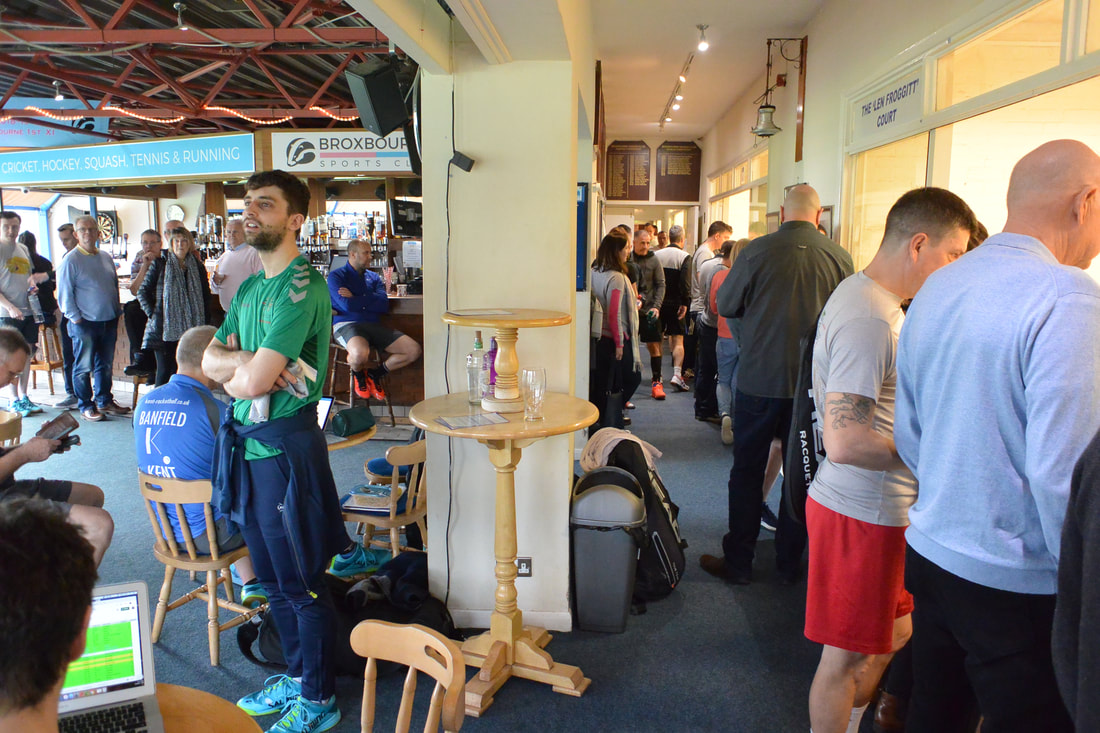