devon county closed
Baker makes it 3 in a row!

The Devon Racketball Championship attracted a record entry of over 60 people last weekend with event organisers very pleased with the tournaments success.

In the Ladies Event a Monrad system was used for the first time, in which every entrant receives a final placing.
The main event saw a new name on the trophy with Carol Hayman beating two time champion Karen Bealey 3-0 in a good contest, with Racketball newcomer Susie Hill edging out Creditons Angie Andrews in the ¾ play off.


The Mens category included Plate and Classic events as well as the main championship.


The Classic event for second round losers saw two surprise packages in the final in contrasting methods, last years main finalist Adam Lings lost to Jim Blackburn in the main draw which placed him as a strong contender in the Classic draw with his opponent Jim Bungard overachieving to reach the same point, the result as expected went the way of Lings winning 3-0.


The main event saw a different final but a similar result, Matt Baker who has had a fantastic season winning the Regional Championship as well as the National Doubles crown was too strong for clubmate Christian Turner sealing victory 3-0 to win his third County Championship in a row!! 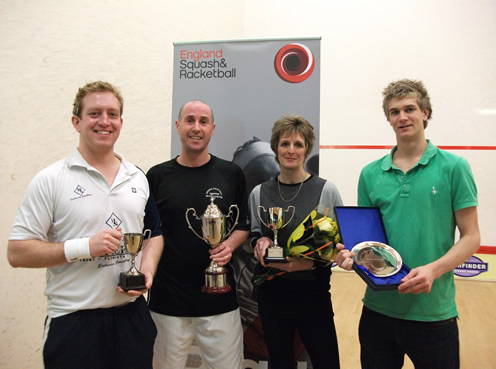 Full scores are listed below