In 2010 UK-Racketball ran the first ever UK Racketball tournament series. The series consisted of 5 tournaments played at some of the most prestigious clubs in the UK. All the tournaments were and still are sanctioned by England Squash and Racketball and have grade 1.5 status. This allows participants to claim ranking points towards their UK Racketball National ranking. 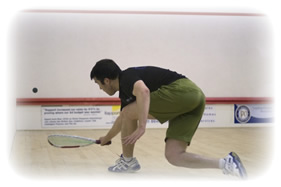 The Club Locations and Dates

(Click the buttons below for results, reports and photos)
The nottingham Squash rackets club - 24th july
The surrey health and rackets club - 7th august
Torquay squash and racketball centre - 4th september
Wolverhampton lawn tennis and squash club - 2nd october
Hunts county squash club - 23rd october
The tournaments were 1 day events with the aim of maximum. Scoring was American to 11 and best of 3 games. Thanks to our sponsors Harrow prises were supplied for all grade winners and runners up. 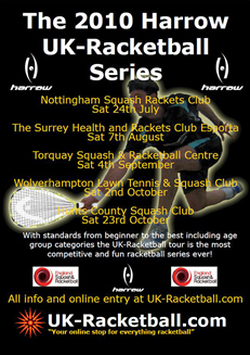 Grade A players were of a county or national standard. Grade B players were from beginner to club level players.

Any questions about the 2010 series?
Please email us at: info@uk-racketball.com