Group A
Group A was headed up by the number one seed and number one ranked Ted Jeal.  Ted was joined by Oli Turner, Nick Bond and Ewan Stewart.  Despite valiant efforts put up by the others, Ted stormed into the final without dropping a single game.

Group B
Elliot Selby was the number one seed in group B and he was joined by Mark Fuller, Paul ‘Knocker’ Norton and Mark Francis.  This was Fuller’s return to the UK-Racketball Series after being out for months with an injury.  Selby was strong and overcame both Knocker and Francis in straight games, but it was a closer affair against Fuller, who insisted on taking all of his group stage games to three.  It was Fuller who topped the group and met Ted in the final.
Final
Ted was raring for the final after the weeks of trash-talking over Twitter with Fuller.  Fitness was on his side and he made excellent use of it; beating the tenacious yet exhausted Fuller in straight games. 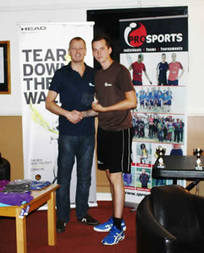 This was the biggest grade of the tournament, with 19 entrants battling it out for the trophy.  There were five groups playing round robins; the winners of the top three groups went straight through to the final and the winners of the bottom two groups fought for the last spot.

It was Kasey Hall, Billy Jones and Ben Emery who topped their respective groups and headed straight into the semis.  Andy Wood and James Murphy topped the last two and had a colossal match to decide who won the last semi-final spot; after three tough games, Andy Wood took the spot.

Semi-Final
The first semi was between Kasey Hall and Billy Jones.  As with many of the matches on the day, the games were long and tough, owing to the heat and the fact that the ball was refusing to die.  This one also went to three but it was Billy, who was no stranger to the B Grade final, made it through.
The second semi was between Ben Emery and Andy Wood.  Despite having an extra match to play to get him through to this point, Andy was still going strong and headed into the final after a 2-0 defeat over Ben.

Final
So the final was set: Andy Wood v Billy Jones.  This was the last match of the day and it had been a tough one.  Both players worked incredibly hard and at 1-1, it really could have gone either way.  However it was Andy who pushed through in the third and took the title. 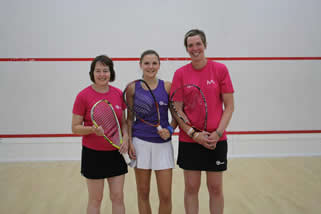 This was the strongest women’s grade of the year so far, with 12 entrants and more than a few strong contenders.  There were three groups that played round robins before the winner of each headed into a winner’s group.  True to form, it was the top seeds in each group that succeeded in going through; Claire Walker from group A, Matilda Parslow from group B and Jo Moseley from group C.  Claire is on her top form at the moment but Jo is last year’s winner and Matilda is coming on all the time, so the winner’s group was set to be tough.

Matilda and Claire both overcame Jo in straight games so it was left to a tie-break match to decide the winner.  These two have faced off at the last few events and this was definitely the closest yet.  However, Claire was too powerful on court for Matilda and did enough to see her take the women’s title.

Group A
Group A saw David Lord take on Neil Baldwin and Marc Bradley.  Whilst both players did well against him and Neil taking a game, it was David who found his way into the final.

Group B
The top seed James Powley was in Group B, joined by Jason Russell, Phil Perchard and Mark Banfield.  James is always strong in this grade and he proved himself again this time by powering into the final, only dropping a game to Jason Russell.

Final
The final was between David Lord and James Powley.  Despite his dominance in the group stages, David met his match in the final.  James was quick and skilful as always and the match was a great one to watch.  In the end, it was James who had more in the tank and he walked away with the Over 40’s final.

This was another big grade, with 13 entrants.  There were three groups that played a round robin, with the winner of each going into a winner’s group.

Group A saw Paul Haigh overcome Jack Gilchrist and Martyn Hambelton, after Andy Hall retired with an injury.  Gabriel Uttley was the winner of group B, after defeating Peter Seddon, Jeremy Turner and Mike Smith.  A winning streak from Series newcomer Paul Brooks against Steven Uttley, Mike Coomes and Peter Edwards took him straight into the winner’s group to face Paul Haigh and Gabriel Uttley.

Winner’s Group
This was a group made up of looooong matches and quite how they managed it in the heat I’ll never know!  Haigh and Brooks both defeated Uttley 2-0 and so it was left to a decider between the two Pauls to see who would take the title.  This match was brutal and really tested the two players in their fitness and endurance.  In the end, it was Haigh who emerged victorious, taking the match 2-1.

Group A saw top seed Ian Graham take on old rival Graham Greensall and local player Phil Hopps.  Group B saw Roy Burns joined by Ian Coulson and Dave Fitzmaurice.  Number one ranked player (Ian Graham) and number two ranked player (Roy Burns) certainly had the pressure on them to win their respective groups.  But if they felt it, they didn’t let it show as both of them coolly headed into the final to face each other once again.


The final is a match that has been played out between these two many times and so both brought their experience of playing the game, and each other, onto the court with them.  In the end it was Ian Graham who lifted another Over 60’s trophy. 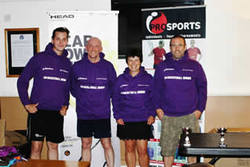 There were only three entrants to the beginner’s group: Andrew Kelly, Gemma Sharpe and Oliver Davidson.  Therefore they played two round robins between them.  Over the course of the day it was Oliver who was victorious over his two opponents and he was the Beginner’s grade winner. 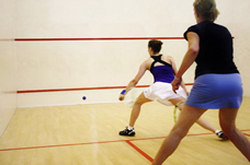 In July, UK-Racketball returns to Chapel A; building on the success of the event in previous years.  Situated in leafy suburban Leeds and the heart of “racketball Yorkshire”, Chapel A promises to be a perfect venue for our UK-Racketball event.

Club Head Coach Peter Edwards is largely responsible for the increasing development of racketball at the club and he is a great supporter of the UK-Racketball Series. Edwards himself reached the semi-finals in the Over 50’s category last year, losing out to Paul Haigh who went on to claim the crown.

Interest is always high in this event, so get your entries in early to avoid missing out on what is sure to be another fantastic racketball tournament. 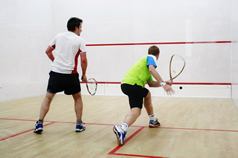 Club facilities
This is one of the nicest clubs in the Series, boasting six squash courts – three of them glass backed – a great gym, lively bar and a bistro area.
Food will be served at the club during the day, with a wide variety of meals and snacks.

Location
Chapel Allerton is not far from the M1 making in an attractive event to a lot of players from the midlands and the south.