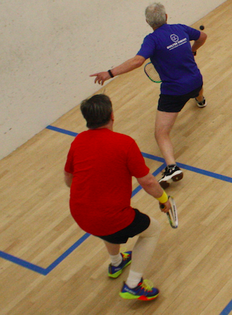 The Over 50’s started this year as it finished last year as the largest draw of the day. It was three matches for all competitors just to make it out of the groups and then a further two in the winners group to take the title. Patrick Osborn who missed the Nationals through injury sailed through Group A without dropping a game. In Group 2 local player Paul Mancy had to withdraw injured and Lee Sadler capitalized to secure a spot in the Finals Group.

​In the B Grade top seed Lee Sadler once again made it through his group without dropping a game to set up the final against Michael Watson from Maidstone. The final was Sadler’s 8th match of the day. Watson had the better start only for Sadler to fight back and level at 1-1. In the end Watson proved too strong coming through the decider to claim his first ever UK-Racketball Series title. 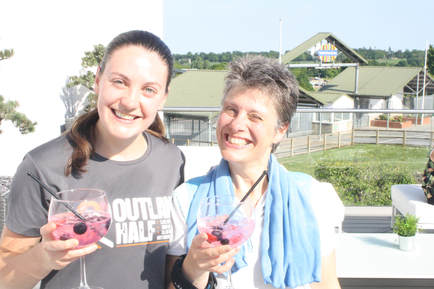 In the B Grade top seed Lee Sadler once again made it through his group without dropping a game to set up the final against Michael Watson from Maidstone. The final was Sadler’s 8th match of the day. Watson had the better start only for Sadler to fight back and level at 1-1. In the end Watson proved too strong coming through the decider to claim his first ever UK-Racketball Series title.

A late withdrawal from an upset Ryan Loska who has just signed up for the entire Series meant the Over 40’s was a three-player group and best of fives. An early upset took place with Nationals runner up Adam Grilli being defeated 3-0 by Peter Ellicok. Ellicock dispatched Cobb in a similar fashion. Ellicock has signed up for the whole Series so watch out if you’re in the Over 40’s.

Many of the local club members had been looking forward to the arrival of Ted Jeal who club manager James Gaston described as “the most exciting Racketball player in the country” but unfortunately a football injury ended his title hopes. This left Chris Bentley to head up Group A which he did with convincing wins over Tim Rawlins and Mike Fleming. In Group B unseeded Dom Hamilton made a welcome return to the Uk-Racketball Series with victories over Mark Fuller and Jason Russel. Hamilton went on to victory in his Semi Final against Rawlins (who’s pint and meat platter may or may not have helped his performance) to secure himself a place in the final. The second semi final saw a rematch of Bentley and Fuller from the Nationals that Fuller claimed narrowly. Harrogate went the same way as Nottingham with Fuller just hanging on long enough to take the sting out of Bentley’s legs and aggressive play.  The final was a great game of Racketball with both players making few errors and moving the ball around well, in the end Fuller secured his 9th Title but it was fantastic to see Hamilton back in action with several players mentioning how great it was to see him play. 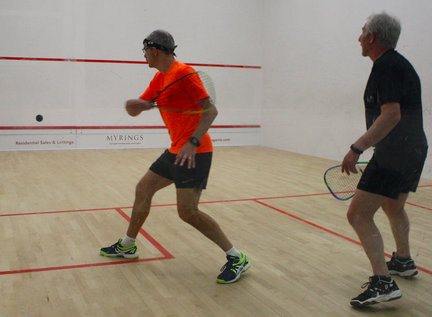 A period of domination exists in the Over 60’s at the moment. Heading into Harrogate Stephen Widdison was on a unbeaten run of 22 matches, with 6 titles on the bounce. Harrogate’s Over 60’s draw was made up of one big group with 4 wins needed to secure the title. The top two seeds Widdison and Marsden came through their opening matches without dropping a game to set up the anticipated final. In the final Widdison started strongly taking the first game only for Marsden to fight back strongly in the 2nd. It was a very high level of Racketball with both players bringing out the best in one another but in the end it was Widdison who added the Harrogate title to his collection and extended his run to 25 matches.

Next up we travel to another Racketball hotspot Bexley on the 9th of June. Bexley is situated almost completely the other side of the UK to Harrogate in Kent. Bexley has an amazing Racketball history which is well worth a read (follow this link - http://www.uk-racketball.com/e3---bexley---9th-june.html). This will be the first UK-Racketball Series event that we incorporate Racketball doubles. Sign up online here - http://fantasysquashshop.com/events/uk-racketball/the-bexley-racketball-open-event-3-of-the-2018-uk-racketball-series-9th-june-2018.html

Follow this link to view all of the other Lawrence Ogden videos from The Harrogate Racketball Open. 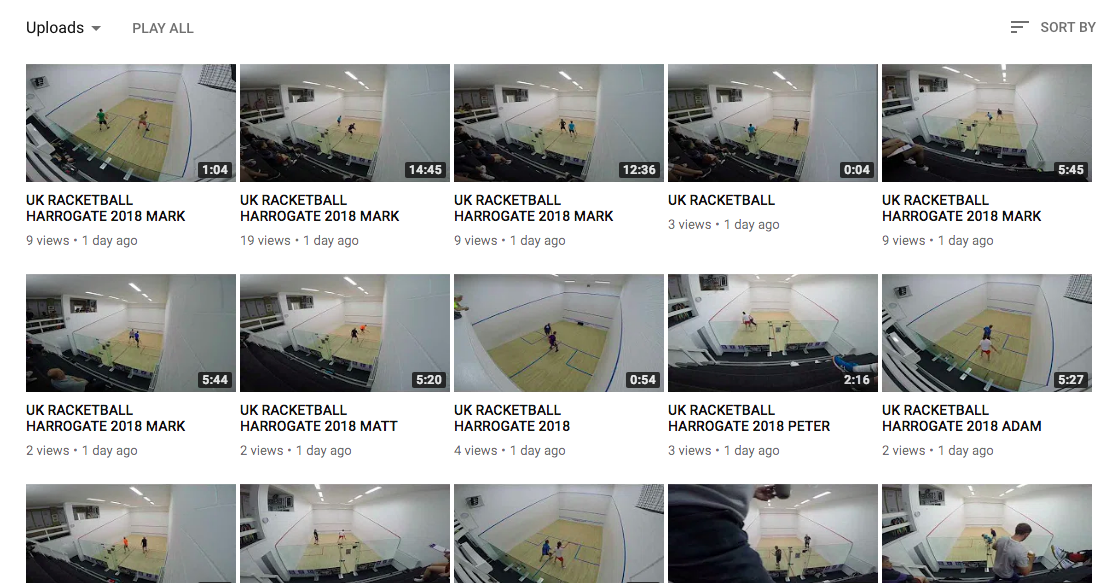 There have been some minor changes to the draws and schedules, please open the links to view.

Open the file below to see the times set for your matches.

We are going to go for a leisurely 10:00 start but obviously this could be later for you depending upon where you fit in the draws. The final matches of the day should be going on at around 17:30. ​

​There have been no changes to the draws. I will add the times in the schedule directly into the draws to make things clearer tomorrow. This is what was done for the National Championships in April and it worked very well.

Open the files below to see the draws for this weekends event.

​This is the furthest that the Series has ever travelled to the north and it's a great entry with all 6 grades running. The A Grade has some big names with Ted Jeal facing off with Dominic Hamilton. The Over 40's has arguably two of the strongest players in the country with Ryan Loska and Adam Grilli. The 50's is once again the largest draw on the day with 13 competitors. Players in the B are set for a brutal day with 2 big groups players need to win 4 matches just to make it through. The women's is a 3 way group with Jennifer Spencer and Alison Page taking on Series player Tanya Ruff. In the Over 60's Stephen Widdison is on a 22 match unbeaten run, can anyone end it on Saturday?!?

​FINAL ENTRY LIST - Draws to be released Sunday 20th May

​Entry List 12th May - 6 days to go before the entry deadline, 9 spaces remaining 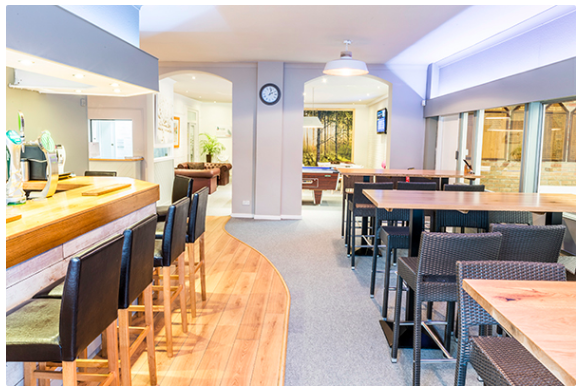 Harrogate has been a leading squash club in the North of England for decades. Home to one of the worlds best coaches David Pearson top England squash players often make the journey to Harrogate to train. Players who regularly compete at Harrogate include Nick Matthew, Laura Massaro and recent Commonwealth  Gold Medalist James Willstrop.

Harrogate shares a trend with many of the Yorkshire Clubs by now having a devoted Racketball membership that has grown to rival the squash membership in terms of size and court usage. This is an event where Series players should expect some tough challenges from club members and competitors from surrounding clubs. This is the first time that the Series has travelled this far north and the club members are said to be relishing the opportunity to try their hand against the countries best!

The club facilities are great with 4 courts including 2 glass backs. A newly refurbished bar that looks out onto the courts and a gym where players can warm up and cool down. With only 4 courts at Harrogate this event is limited to 50 entrants so enter early to avoid disappointment. 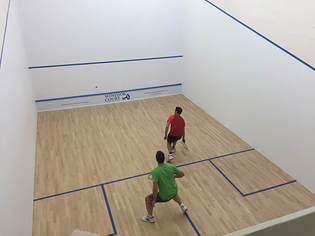 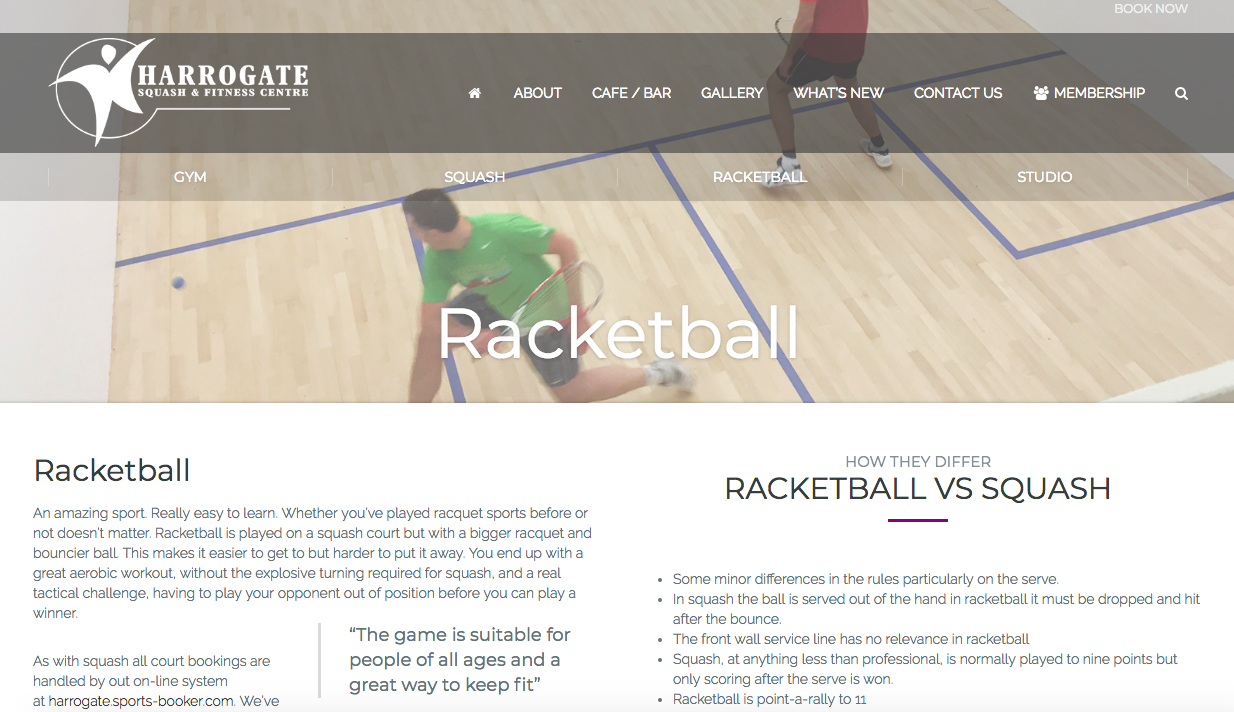