The newcomer to the UK-Racketball Series last year, the Leamington Racketball Open is the third event in Series.  With the tournament running two weeks before the National Championships, we saw a high entry number as many viewed this event as the perfect warm up.
Click here to see: Photos - Results 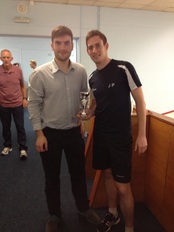 With the England Number 1 Ted Jeal pulling out of at the very last moment and Fuller, Haycocks, Hamilton and Selby not playing this tournament it gave some of the up and coming players a chance to get good points.

Group A saw Dan Soar having a couple of close matches against Peter Knowles and Nick Bond but eventually came out on top winning 2-1. Bond came a close second only losing to Soar. In group B Jason Pike was tipped to win his matches comfortably. Oli Turner and James Powley put up a good fight but could not break Pike’s fitness.

The final saw one of the best matches of the day with Dan Soar taking on Jason Pike. The games reached 1-1 and tension began to build in the crowd. There was some brutal rallies with both displaying amazing racket skills. Dan eventually came out on top to take the 3 game.

With 15 quality players in the B grade it was bound to be a great event.

Group A contained the 2014 Manor B Grade winner Ryan Loska who once again showed his class and strength through the group stages, winning without dropping a game. Khokhar had a close game with Gallow, taking a game off him, but Gallow closed it out 2-1. In group B, Bruce Macdonald looked to be strong defeating Richard Taylor and Michael Keogh. His next match against Jonathon Leat was where he started to become unstuck losing in a close 2-1. Leat went through to win all his matches in his group. 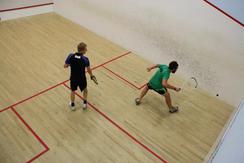 Group C saw an unfortunate injury from Adrian Murphy after he beat Natalie Larence 2-1. This Lawrence did not take any prisoners against Simon stone and got through to the semis . In Group D, Terry Horne was a very close second to Dan Lewis who showed good strength and won all his matches in this group.

The semi final between Loska and Leat saw a true grind of a match. Both players struggling to put an end to the rally. Loska saw off Leat with patient play and showed his experience 2-0. Next on court was Natalie Lawrence vs. Dan Lewis. Natalie unfortunately had to withdraw from the B Grade semi finals which meant that Dan Lewis went straight through to the Final.

The final was contested by Ryan Loska and Dan Lewis. Loska showed dominance throughout that he’d shown in the previous round and won 2-0. 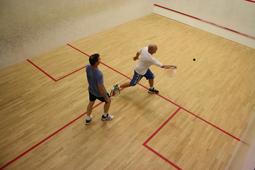 Leamington’s over 40 event was very strong with 12 people battling it out.

Group A had James Powley showing true class and dominance, not dropping a game against Beck, Voyce or Leat. Group B was slightly closer with Bruce Macdonald chasing Marc Thornley for the position to go through but was unable to beat Thornley and their match ended as 2-1. Due to an unfortunate set of circumstances 3 out of 4 people in group C were unable to play giving Ian Fudge the place to go through.

In the finals round robin, James Powley made light work of Thornley and Fudge to take the Over 40’s grade trophy.

In group A Patrick Osborn showed strength to defeat everyone in his group without dropping a game. Cordeaux came a close second in that group only losing to Osborn. Group B was strongly contested group with Stuart Ferguson, Mark Fitton, Simon Collinson and Chris Hawken. Ferguson went through to the semi finals winning all his matches. Collinson pushed Hawken but was unable to finish it losing 2-1.


In group C Michael English, fresh from his A grade matches, went on to play Withey. The extra work he had to do in previous games was evident and Withey beat him 2-0. James Murphy was unable to overcome the tenacity of Withey and English. In group D Jonathon Althan sneaked through to the semis in a group that was very close all the way through.

The first semi final was between Patrick Osborn and Stuart Ferguson. The match was close but accuracy prevailed with Osborn winning 2-1 to go through to the final. The second semi final saw Withey showing the same great form that he had shown through the group stages and beat John Althan 2-0.

Leading up to the final Osborn had more work put into his legs which became evident after the first game. He dug in but could not break the fresher Withey who took the final 2-1. 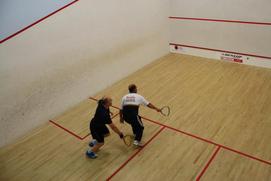 Group A was initially had 4 players in but due to a last minute drop out it shrunk down to 3. Rob Lathbury came through winning all his games to proceed to the finals round robin. In group B Graham Greensall prevailed beating all his competitors in the group stages. Alan Holder showed his skills but could not beat Greensall.

Group C was a big group with 5 players. Richard Willer showed the ambition required to beat some seasoned veterans in the racketball world and went straight through to the final group, only dropping 1 game to Nigel Sharpe. Despite Richard Willer having to play more matches he came out strong against Rob Lathbury winning 2-0. Greensall nearly clinched it against Willer but Willer managed to hold him off winning 2-1.

Willer won the final group with 4 points as opposed to Lathbury’s 2 and Greensall’s 1. 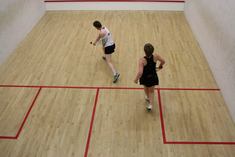 Sam Mueller came through dispatching everyone in group A only losing a game to Rachel Woolford.  Group B had an unfortunate last minute pull out which left Natalie Lawrence in a good position to go through to the next round. Lawrence won all her games 2-0. In group C Chloe Widdowson battled hard and had a very close game with Rachel Holmes but didn’t have enough in the tank to take the 3rd game.

Natalie Lawrence continued good form to once again not drop a game in the finals, winning the Women's Grade.

The newcomer to the UK-Racketball Series last year, the Leamington Racketball Open is the third event in Series.

With the event taking place only two weeks before the National Championships it is bound to be competitive, with players looking to hone their skills just before the biggest tournament in the racketball world.

The club itself has a strong tennis and squash history with a growing racketball membership. Head coach Jason Pike has made a fantastic impact at the club with new junior sessions, club nights and even a PSA closed satellite event. The club looks to be going from strength to strength making it a very exciting prospect for the UK-Racketball Series.

The winner’s group was so highly competitive last year, and the matches were long and tough. Considering it was his first UK Racketball event, Jason Pike put up a tough fight against number one seed Ted Jeal and managed to take the first game.  But Ted was just too strong for him and ended up winning 2-1.

Leamington Lawn Tennis and Squash Club is the oldest Lawn Tennis Club in the country with fantastic Tennis facilities. The squash and racketball section has recently been redone with new changing facilities and bar area. The club has 5 squash courts including a championship court with plenty of seating.

Leamington Spa is located to the South East of Birmingham and close to the M40; a new area of the county for the UK-Racketball Series.