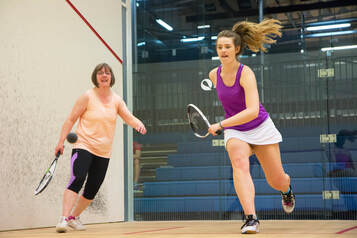 England Squash has produced a toolkit of resources for clubs, leisure centres and universities looking to deliver Squash 57 sessions, which can be found following this address: englandsquash.com/squash57

Mark Williams, Director of Sport at England Squash said: “This campaign is part of our long-term strategy to engage more players and break down the barriers. We’re delighted to work in partnership with UK-Racketball to raise the profile of Squash 57 and reach a wider audience.

“Squash 57 is a brilliant, fun and social game and a popular introduction to squash with thousands of people playing weekly in England. It’s a great way to keep courts busy, for families to play together and to keep players on court well into their later years. This campaign aims to encourage people from all walks of life to pick up a racket and give it go.”

Mark Fuller, Director at UK-Racketball said: “It's a very exciting time for Squash 57. Since working with England Squash, we’ve seen an increase in the number of players participating in all events and are expecting a fantastic turn out at this year’s National Championships.

“Through this partnership, we also aim to grow grassroots participation resulting in more new players discovering Squash 57. The Squash 57 toolkit will help clubs, leisure centres, universities and coaches to deliver activities and promote the game to new players.”
​Promote the game at your club with these downloadable, editable posters: